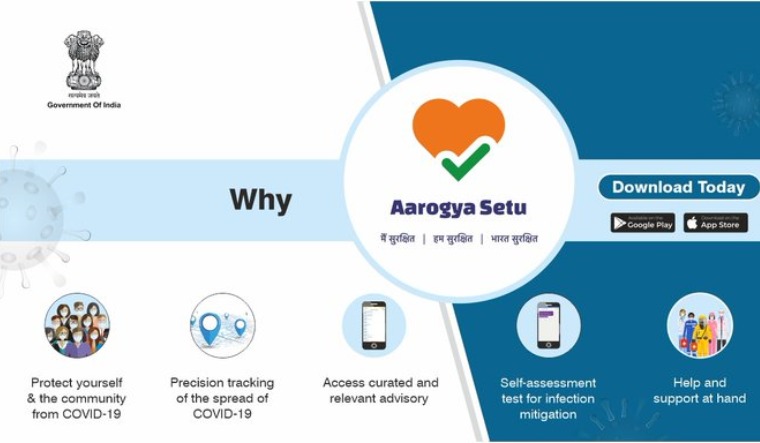 The Aarogya Setu mobile app is no longer mandatory for all citizens. But it is compulsory for all government employees, residents of COVID-19 containment zones, people under quarantine and international travellers entering the country.

Amid apprehensions of privacy activists who consider the app as an "unwarranted" surveillance tool, the popularity of the app seems to be growing in Karnataka.

As many as 63.53 lakh people have downloaded the mobile app in Karnataka, of which 28.54 lakh people are from Bengaluru.

Even as the state has relaxed most of the inter-state and inter-district travel restrictions and opened up a majority of the industries and commercial activities in the fourth phase of lockdown, people are relying on the app to help them keep away from high-risk zones and infected people.

"Around 63 lakh people have downloaded the app in Karnataka. Of this, 2,255 users got a red flag alert through the self-test feature, which recommends corona testing. Out of the 233 people who got themselves tested, 17 were found to be positive. It means 7.5 per cent people who got tested following the app alert have tested positive, against the national average of 30 per cent," said Medical Education Minister Dr K. Sudhakar, adding that the mobile app was effective in controlling the spread of the novel coronavirus.

"The app protects the user from being infected and, therefore, it is mandatory for all government staff to use the application. It has become an effective weapon in the fight against COVID-19. More than 10 crore people in the country have already downloaded it. The app has been designed using artificial intelligence and high-level algorithms to provide real-time information about the infected persons. The application provides you all information regarding COVID-19," said Sudhakar, adding that there were no privacy concerns.

"People need not panic as the data about the positive patients is accessible only to the district taskforce heads. The application is safe to use as it is controlled by the Government of India using high-level confidential protocols," said the minister who urged all the smartphone users to download the app.