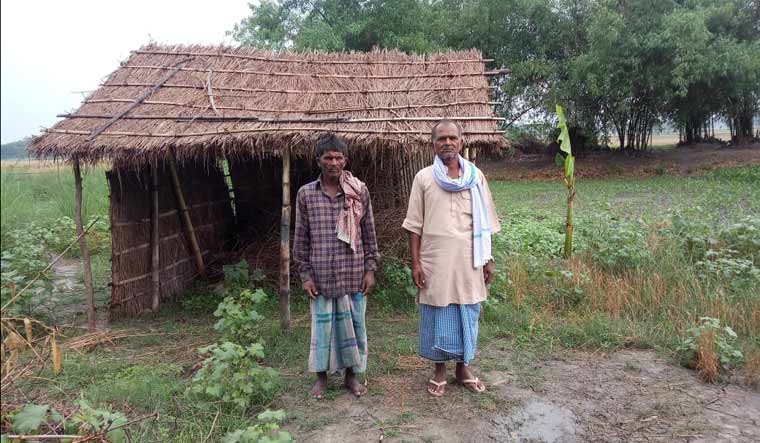 Israil Miyan (right) and his brother Rafiq, on the disputed land | Sourced image

Pharahad Husain is one of the lakhs of migrants forced home by the COVID-19 lockdown, to face even knottier problems. In his case, it is the prospect of losing a piece of land his family purchased some years ago.

Husain is among the 1.7 crore people from Bihar who travelled to find work elsewhere. This 29-year-old from a caste of barbers, works in a refrigeration unit in Lucknow from where he returned to his village of Parsa Dumaria in Parsa block (West Champaran district) in the end of March.

“A powerful landlord in our village is since threatening my family to either vacate the land we bought from him failing which he will evict us”, says Husain.

In August 2018, Husain’s father Israil Miyan, and his uncle Rafiq Miyan had pooled in Rs 16,000 by pawning the jewellery of the women folk and a further Rs 79,000 through loans (at an interest of Rs 50 per Rs 1,000) to buy 0.137 acre of land. This lay right behind the homestead owned by Husain’s extended family (approximately 0.04 acres) the size of which Husain describes as “big enough only for us to lie side by side to sleep”.

The land was sold to Husain’s family by the nephew of one Bishamber Singh, a locally powerful member of the Bihar's dominant Bhumihar caste. The Rs 500 stamp paper which records this sale lists this land as ‘gair mujariya malik’ occupied by Singh’s family for ‘countless years’. This is common land—that is, land which belongs to the village. In legal parlance, this is different from ‘gair mujariya khas’, that is land acquired by the government from big landowners as part of its land redistribution efforts under the Bihar Land Reforms (Fixation of ceiling and Acquisition of Surplus Land) Act, 1961.

The private ownership of community land in Bihar—without paper but as custom—is common in the state.

Ajay Singh, a Vaishali-based expert and activist on land issues who has formerly worked as a state coordinator for the core committee on land reforms in Bihar, says that land records in Bihar cannot be trusted, despite the state having a history of land reforms.

He quotes from the example of a study on land availability in the district of Vaishali which he had been part of in 2014. “We studied six panchayats to identify government land parcels of at least more than two acres where homeless people could be settled. Such land pieces existed on paper but upon physical verification we found that they had been taken over by people in the neighbourhood. This holds good for the entire state.”

Technically thus, Husain’s family bought land from an owner who did not have it to sell. Under the lockdown, such owners are reclaiming land which they did not own initially.

Amar Mehsi, a land rights activist who works in Bihar's East Champaran district, says, “There are instances of people not allowing returning migrants to build houses on the land that they own. Land conflicts are on the rise in the lockdown and we are studying them”.

This observation is upheld by Dinesh Singh, the sarpanch (headman) of Parsa under which fall 22 tolas (hamlets), including the one in which Hussain and Bishamber Singh live.

“In normal times, too, at least one land dispute would come to us every week. What good is the panchayat if the concerned parties do not listen to us? Now, I just suggest to everyone that they must approach the civil court as such matters are clearly beyond us.”

But litigation on land issues is expensive and out of reach for a family like Husain’s. It is also time consuming.

“Four brothers in the family live and work elsewhere. Together we save around Rs 40,000 to send home. There is no agricultural land in the family. We had bought this land to cultivate,” he says. Husain has six siblings and five cousins (one daughter and four sons of his uncle).

Bishamber Singh says that the disputed land was sold off fraudulently by one of his errant nephews (a son of his brother). “It was common knowledge in the village that the land was in our family. The buyers got greedy and bought it despite that,” he says.

Singh has produced a judgement of the panchayat dated December 2019 to bolster his claim. “The panchayat asked me to deposit Rs 32,000 towards getting the land back. The rest of the money should be claimed from my nephew. I just want my land back,” he says.

Husain says that the lockdown has been used by Singh to press his claim with greater force. “Five days into the lockdown, his (Singh’s) men waylaid my father in the market threatening violence if we did not vacate the land. When we went to the sarpanch, he said that we must not create trouble during the lockdown”.

Bihar’s land problems are vexatious in the best of times. They are marked by feudal ownership, share cropping, usurious exploitation and bonded labour.

In March, just before the lockdown, Chief Minister Nitish Kumar had announced that 80 per cent of these land disputes would be resolved after ongoing land surveys and settlement work. He had even directed the employment of more manpower, if need be, noting than 60 per cent of all violent crimes in the state had their genesis in land conflicts.

The lockdown now seems to have become both means and ends to further entangle issues as access to the police and legal system have become challenging.

“We are poor people, now with no means of livelihood. The virus took away everything. If we are now driven off the land, what option do we have,” asks Husain.