The migrants were going from Rajasthan to their homes in Bihar, Jharkhand, Bengal 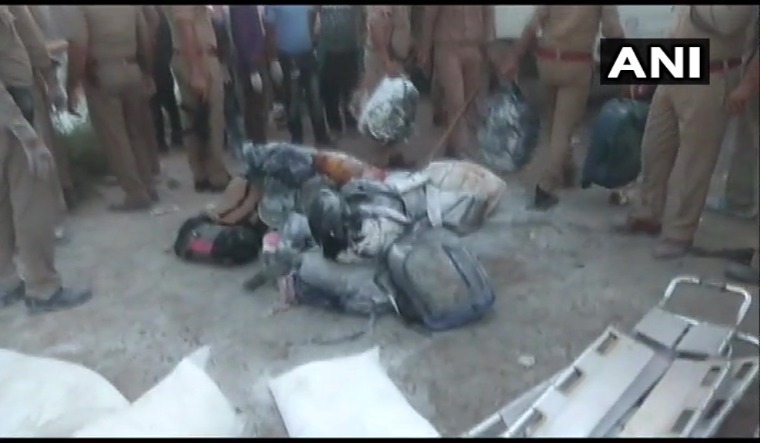 In yet another accident involving migrant workers heading home due to the coronavirus lockdown, as many as 24 migrants were killed and many injured in a collision between two trucks in Auraiya district in the wee hours of Friday. The migrants were travelling in one of the trucks.

DD News reported 38 people were injured in the accident.

NDTV reported, "The group of migrants started their journey from Rajasthan and they were headed to their hometowns in Bihar, Jharkhand and West Bengal." News agency ANI reported the accident occurred around 3.30am.

The office of Uttar Pradesh Chief Minister Yogi Adityanath issued a statement on the Auraiya accident stating, "Honourable chief minister has taken note of the unfortunate incident in Auraiya. He has expressed his deepest condolences to the families of the labourers who lost their lives. He has also directed that all the injured be provided medical care immediately and the commissioner and IG Kanpur to visit the site and give the report on the cause of the accident immediately."

This is the third major accident involving migrants in just two days. Early on Thursday morning, 14 people were killed and nearly 50 injured in two separate road accidents in Uttar Pradesh and Madhya Pradesh.

The hardships of migrants have been in focus for over a month since the nationwide lockdown began. On Friday, the Supreme Court said it is impossible for courts to monitor or stop the movement of migrant workers across the country and it is for the government to take necessary action in this regard. On Friday evening, the Union ministry of home affairs asked state governments to provide food and shelter to migrant workers if they are found walking on roads and railway tracks, and ensure they board special trains to reach their native places.