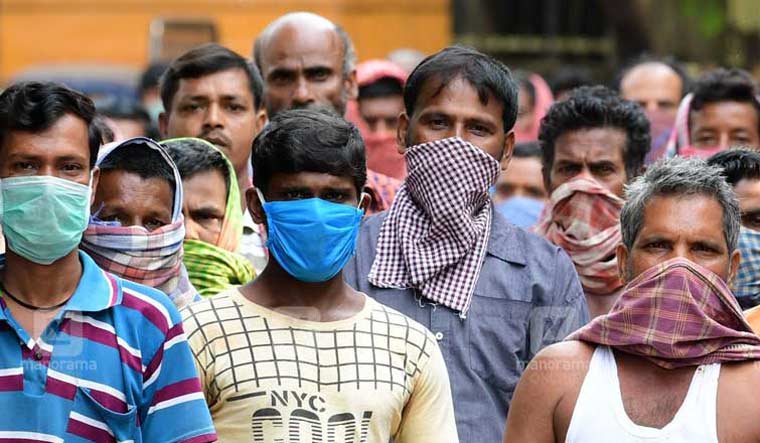 Television, indoor games like carrom and chess for entertainment and even recharge for mobile phones are just some facilities provided for 'guest workers', as migrant labourers are called in Kerala, by the LDF government, setting an example to the rest of the country.

While migrant labourers in many states are up in arms over lack of facilities given to them, including transport to their states, the more than 3.5 lakh 'guest workers' in 19,764 camps in Kerala have no complaints and are waiting for the dangers of the pandemic to pass.

"The basic needs of the workers like drinking water and cooking facilities have been ensured. Those who prefer to have food like chapathi and sabji are given that. Milk is supplied to the camps through state-run Milma. Along with that, food from community kitchens has also been provided to the workers. Besides, if they wish to prepare their own food, the required items are supplied to them," a senior official from the labour department told PTI.

The state government has also been issuing posters, making announcements and video messages in various languages, including Assamese, Odiya, Hindi and Bengali, among others, to sensitise the guest workers on the deadly COVID-19 and the importance of social distancing and cleanliness.

Most of the guest workers who shared their thoughts with PTI, expressed the hope that they would be able to meet their families after the lockdown ends, but were also worried about the jobs in the future.

"I came to Kerala years ago from Maharashtra. My whole family is still there. I go there once in a year. Everything was well and fine here till this issue," Babu Lal, a guest worker, now lodged at a make-shift camp in a school located in the capital city of the state, said.

He said those in the camp get breakfast, lunch, snacks in the evening and dinner and they have been following the social distancing norms.

"After all this (pandemic scare) is over I will visit my family. But before going to Maharashtra, I will have to work here for one or two months so that I can save some money before I meet my family," Lal, who speaks and understands Malayalam well, told PTI.

These workers, the major labour force of Kerala, were employed in construction, road works and in hotels, supermarkets and also as private security guards.

Some of them have considered this lockdown period as a vacation from their hectic work schedules.

"I have been working in various hotels for nearly a decade in Kerala and at restaurants. The work starts early in the morning and goes on till late at night. Now our hotel is closed and we are in this camp. We don't have any work, but have food and accommodation, along with TV," Gautam, a worker from Odisha, said.

Gautam's camp, a government school which houses at least 215 workers from various states, has two televisions with cable connection.

Another worker said he was bored of sitting idle without any work and was also worried also whether there would be any jobs for them after the lockdown ends.

"We are staying here without any work. The only issue is that we don't have any income as of now. I don't know whether there will be any jobs after all this ends. We need to send money to our families also," Prem Kumar, an Uttar Pradesh resident said.

He was working as a private security guard and later left that for a job in a hotel.

Those put up at the Government Central High School, which hosts mainly workers from other parts of Kerala and Tamil Nadu and other southern busy themselves in gardening.

"The workers, instead of sitting idle, have been engaged in gardening while maintaining social distancing. By the time school reopens, I am sure they would beautifully alter the landscape. The city corporation has been providing the necessary equipment which they sought for the purpose," Shine, a city corporation staff in charge of the camp, said.

He said if any worker required medical help, an ambulance is brought from the nearest government hospital and they are taken there for a checkup.

The state has appointed a rapid response team headed by Labour Commissioner Pranab Jyothinath to look into the welfare of the guest workers.

A district-level team inspects the labour camps in the state every day to monitor the situation.

In Kochi, Border Security Force jawans spoke to guest workers at a camp in suburban Perumbavoor, which is home to the most number of workers from other states.

"There are many workers from other states, including Assam, Odisha and West Bengal. Our jawans spoke to them in their language so that they understand the situation properly. We have explained to them what is being done for them in Kerala," an officer said.

A video of a home guard conversing in Hindi with workers from outside Kerala on March 30 and telling them about the dangers of COVID-19 and the need to stay at home and maintain social distancing, went viral in the social media recently.

The measures were intensified after March 29, after hundreds of migrant workers at Chenganassery in Kottayam district came out on the streets violating the 21-day lockdown restrictions imposed by the Union government to prevent the spread of pandemic COVID-19, demanding that arrangements be made for their travel to native villages in north India.

Chief Minister Pinarayi Vijayan had said the government has made all arrangements for medical assistance to guest workers and was constantly engaging with them to ensure their well-being.

He had lashed out at "forces trying to create unrest in society by provoking the guest workers to the streets during the pandemic."