30% of COVID-19 cases in India are linked to Tablighi Jamaat event: Health ministry

Mortality rate in COVID-19 cases in India has been around 3.3% 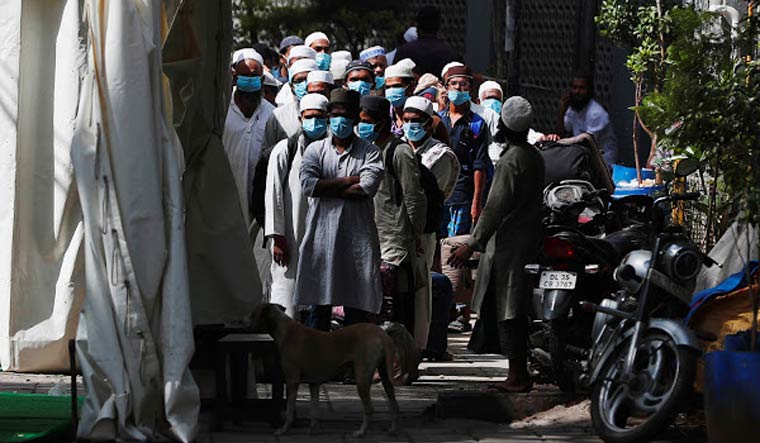 [File] Men wearing protective masks wait for a bus that will take them to a quarantine facility in Nizamuddin, Delhi | Reuters

Nearly 30 per cent of the COVID-19 cases reported in India are linked to the Tablighi Jamaat's markaz event held in Delhi's Nizamuddin area in March, according to Union health ministry.

"A total of 4,291 COVID-19 cases or 29.8 per cent of the 14,378 coronavirus infections reported till Saturday morning are linked to the Tablighi Jamaat congregation," Joint Secretary in the Health Ministry Lav Agarwal said at his daily media briefing.

By Saturday evening, the number of confirmed cases in India rose to 14,792 and the death toll reached 488.

The markaz event had sparked off a storm after many of those who attended the controversial  congregation tested positive for the deadly virus. About 9,000 Tabligh Jamaat followers and their primary contacts had bee quarantined after the government undertook massive efforts as part of steps to check the spread of the virus.

Agarwal said most of the Markaz event-related cases have been found in states with high burden of the disease, such as Tamil Nadu (84 per cent), Telengana (79 per cent), Delhi (63 per cent), Uttar Pradesh (59 per cent) and Andhra Pradesh (61 per cent).

Some states which have reported fewer COVID-19 infections, also had cases with links to the Markaz event, he added.

Agarwal said the only case reported in Arunachal Pradesh till now is related to the Markaz event.  Also, 32 of the 35 cases reported in Assam and 10 out of 12 cases from the Andaman and Nicobar Islands are also linked to the same congregation.

"The reason I drew your attention to this event is to highlight that even if one person does not follow the guidelines of social distancing and lockdown, the entire country has to suffer the consequences," Agarwal said.

In Uttar Pradesh, of the 125 cases reported on Saturday, 86 are linked to the markaz event.

The data showed that 75.3 per cent of the cases belong to above 60 years age category. Also it is seen that 83 per cent of cases had co-morbidities. According to health ministry, this brings to fore the earlier highlighted facts that elderly people and people with co-morbidities are at higher risk.

"We see that 75.3 per cent deaths have been among those aged 60 or above and in 83 per cent cases there were co-morbidities," Agarwal said