Rise in cases should not be seen as a national trend, says health ministry 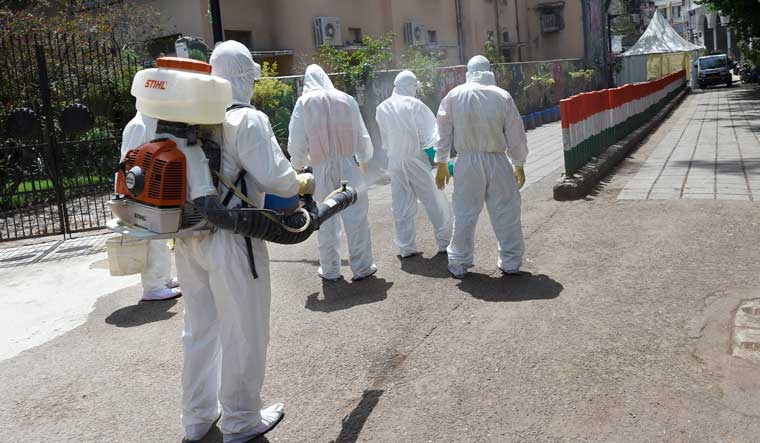 Health workers sanitise their colleagues after disinfecting an area near Nizamuddin mosque, in the wake of coronavirus pandemic, in New Delhi, Wednesday, April 1, 2020, | PTI

Amid mounting concerns over the novel coronavirus pandemic, the Union health ministry on Wednesday squarely blamed the Tablighi Jamaat for the sudden spike in the number of positive cases in the country.

At least 386 new positive cases and three deaths have been reported in the country since Tuesday. Though the ministry said the rise should not be seen as a national trend, it warned that the number of cases may rise due to negligence and carelessness.

"Till now, there are 1637 COVID-19 cases, including 386 new positive cases and three new deaths since yesterday. The main reason for increased number of cases is that members of the Tablighi Jamaat have travelled across the country,” said Lav Agarwal, Joint Secretary of the Health Ministry.

As many as 38 people have succumbed to the disease in the country so far while 132 people have recovered.

“Our advice is that any kind of congregation should be avoided. Social distancing measures should be followed 100 per cent," said Agarwal, adding that at least 1,800 people related to Tablighi Jamaat have been shifted to 9 hospitals and quarantine centres in various states.

As the number of confirmed cases is on the rise, the Railways is preparing to set up 3.2 lakh isolation and quarantine beds by modifying 20,000 train coaches. Modification of 5,000 coaches has already begun, said Agarwal.

Meanwhile, the government agencies have stepped up their efforts to identify those attended the religious congregation at Tablighi Jamaat Markaz in the Nizamuddin area and their primary contacts.

The Railways is scrambling to provide information regarding thousands of passengers who travelled on five trains with people who participated in the Tablighi Jamaat congregation in Delhi, many of whom have tested positive.

A total of 167 people from Himachal Pradesh have been identified to have returned to the state after attending the Markaz, and have been quarantined.

The Maharashtra government has identified at least 700 people, including 450 from Mumbai, who attended the religious event. The police have collated data from the Bureau of Immigration to track those who arrived from various countries, mainly from Indonesia, Malaysia, Mauritius and the Philippines. Maharashtra has reported the maximum number of COVID-19 cases in the country with a total of 320 people from the state testing positive.

In Tamil Nadu, the number of infected cases jumped to 234—almost double than the number a day before. The state health department said among the 110 fresh cases reported, 108 persons had attended the religious event in Delhi.

The Uttar Pradesh government, after a night-long operation, has identified 569 coronavirus suspected cases, including 218 foreign nationals. Officials said the passport of those who attended the Markaz event in Delhi would be impounded as they had violated visa norms.

Andhra Pradesh Chief Minister Jaganmohan Reddy said on Tuesday that of the 87 cases that tested positive in the state, 70 have a Delhi connection. He also revealed that at least 1,085 people from the state had attended the Jamaat event between March 15 and 17.

In Haryana, at least 503 people including 72 foreigners who attended the religious congregation have been identified and put under quarantine. The government suspects more number of people must have attended the event and the efforts to identify them are on.

The Madhya Pradesh government claimed that it had tracked all the 107 people from the state who attended the Markaz event.

Karnataka Health Minister B.Sriramulu said about 300 people from the state had attended the religious congregation of Tablighi Jamaat, and 40 of them have been identified and quarantined. Earlier in the day, Additional Chief Secretary-Health and Family Welfare Department Jawaid Akhtar had said the government has so far identified 78 people from the state who were "associated" with Tablighi Jamaat and has quarantined them.