From Tamil Nadu to Meghalaya, a massive hunt to trace Tablighi Nizamuddin contacts 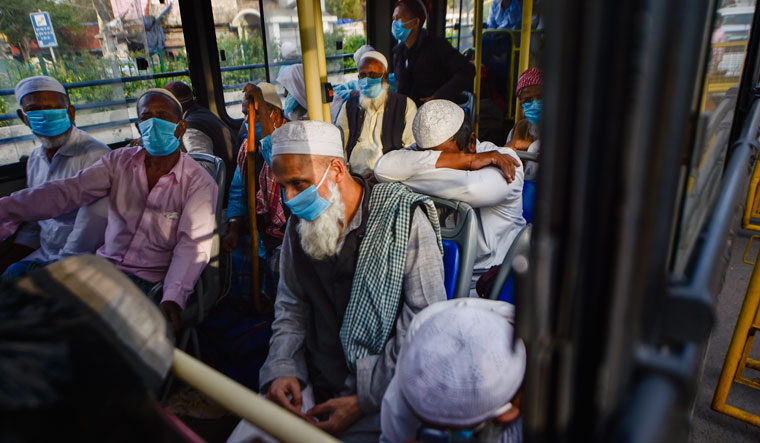 After the Tablighi Jamath religious congregation in Nizamuddin, held earlier this month, emerged a major hotspot of the coronavirus in India, authorities have launched a nationwide search to identify and isolate participants. There are fears that thousands present there could have carried the infection to the length and breadth of the country. From March 1-15, over 2,000 delegates, including those from countries like Indonesia and Malaysia, attended a religious gathering organised by the Islamic organisation at Markaz in Delhi's Nizamuddin. They had returned to their homes in virtually every state, including Telangana, West Bengal, Karnataka and Gujarat. Many of these states have reported COVID-19 cases linked to this congregation. Seven deaths on Monday were reported in connection with COVID-19 spread from the congregation.

Several fresh cases of COVID-19 infection were reported on Tuesday from Delhi, Maharashtra, Kerala, Uttar Pradesh, Tamil Nadu, Gujarat, Jammu and Kashmir and Bihar, among other places, taking the nationwide tally well past 1,400 with at least 45 deaths, as per figures announced by government officials in different states.

But, a consolidated official COVID-19 tally announced later in the evening by the Union health ministry put the total number of confirmed cases at 1,397 and 35 deaths, marking an increase of 146 positive cases and three deaths since Monday night. There were two in Punjab, and one in Maharashtra. However, this apparently did not include six deaths reported by Telangana government last night, all of who had attended the Nizamuddin congregation.

All in all, what are the numbers have different states reported, in connection with the Tablighi gathering? How are they identifying those who attended the congregation?

In the national capital alone, at least 24 people who took part in the religious congregation have tested positive for the novel coronavirus, Delhi Chief Minister Arvind Kejriwal said, as he slammed the organisers for being "highly irresponsible" on their part to hold such an event at a time when thousands have died in other countries due to the pandemic. The Union home ministry said approximately 2,100 foreigners visited India for 'tabligh' activities this year, including those from Indonesia, Malaysia, Thailand, Nepal, Myanmar, Bangladesh, Sri Lanka and Kyrgyzstan. It also said that all state police have been asked to locate Indian Tablighi workers from local coordinators, followed by their medical screening and quarantine.

The Gujarat police on Tuesday said some persons from the state had attended the Tablighi congregation, and process is in to identity and locate them. From Surat alone, as many as 76 people had attended the gathering, according to the police. Now, authorities are trying to locate them as they may have got infected with the deadly virus.While a probe has been ordered to identify all the attendees, primary investigations so far had revealed that some persons from Bhavnagar, too, had visited the congregation, said Gujarat DGP Shivanand Jha.

The Assam government said Tuesday it has names of 456 people from the state who were present in and around Delhi's Nizamuddin Dargah, and has moved to find and quarantine them. Health Minister Himanta Biswa Sarma told media the state government received a list of 299 people who were either in or around the site during the Tablighi congregation. Two hours later, a list of another 157 people from Assam being present there was received, taking the total count to 456. "We don't know if there were more people from Assam in the religious event. This is the list we have presently. Through mobile tracing, we got their names, address, he said. "I immediately held an urgent video conference with all the district Deputy Commissioners and Superintendents of Police and advised them to take swift and strict measures for all those who returned from the hotspot at Nizamuddin Markaz of Tablighi", Sarma said, adding he gave the instruction that all 456 be quarantined.

Tamil Nadu on Tuesday saw as many as 57 new COVID-19 cases, the highest spike in a single day so far and 50 of them had travelled to Delhi to attend the religious congregation. The aggregate number of virus cases stood at 124 in Tamil Nadu, with at least 77 of them having links to the congregation held in the national capital recently. Health Secretary Beela Rajesh said of the 50 cases, 45 had travelled to Delhi to participate in the religious meet at the national capital's Nizamuddin West area.
The government also said efforts were afoot to 'isolate' all the participants of the conference from Tamil Nadu soon to stem the further spread of the contagion.

The Uttar Pradesh government on Tuesday said 157 people from the state attended the Tablighi congregation, claiming that most of them have been traced. Additional Chief Secretary (Home) Awanish Awasthi said "95 per cent" of this number have been traced and are being tested for coronavirus. The tests so far have come out negative, he said. Awasthi's press briefing came a few hours after Chief Minister Yogi Adityanath cut short a western Utter Pradesh trip, rushing back to Lucknow to take stock of the possible fallout of the Nizamnuddin congregation. "People are being tracked. Their testing has to be done. If they are tested positive, they will be quarantined and given treatment," Awasthi said, adding that the chief minister has directed not to show any laxity in this regard.

The Uttarakhand government directed the district administrations to identify people who had attended the religious congregation. Taking cognisance of reports that people from the state had also attended the gathering at Nizamuddin West in south Delhi from March 1-15, the district magistrates and chief medical officers of all districts have been asked to identify them. They have also been asked to speak to prominent people of the Tablighi to convince members of their community so that they come forward on their own to confirm that they had attended the congregation.

The Manipur government on Tuesday said it has found out 14 people who were "linked" to the Tablighi congregation held in Delhi's Nizamuddin, though 39 others are still outside the state. The state government had received a list of names and phone numbers from the Centre and the 14 have been traced in collaboration with administrations of districts, a statement issued by the COVID-19 Central Control Room said. Of them, three have been taken for testing and the remaining 11 will be screened, it said.