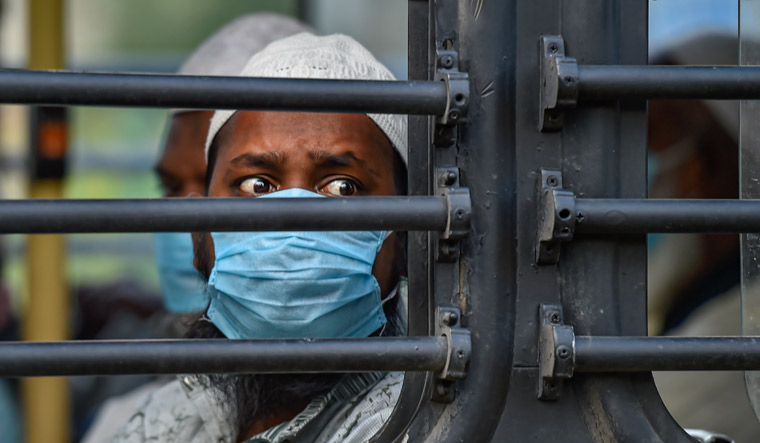 The Delhi government has described the congregation at the Markaz Tablighi Jamath at Hazrat Nizamuddin as a criminal act that was carried out in violation of prohibitory orders that were already in place in the national capital banning large gatherings in an effort to prevent the spread of the novel coronavirus.

Chief Minister Arvind Kejriwal, keen that criminal action must follow for allowing such a large gathering in the midst of the restrictions put in place in view of the coronavirus outbreak, has already asked the Delhi Police to register an FIR against the maulana of the Markaz.

The Delhi government had on March 13—exercising powers conferred by the Delhi Epidemic Diseases, COVID-19, Regulations, 2020, and the Epidemic Diseases Act, 1897—prohibited all sports gatherings, including IPL matches, as well as conferences and seminars having 200 or more people.

According to the Delhi government, there could be no defence for hosting such a large gathering on the dates that it occurred. The congregation at the Jamath, according to the government, is a clear violation of the order, and criminal action must follow.

It is also felt that a permission to leave the premises after the lockdown would have only spurred further spread of the coronavirus.

According to a statement issued by Delhi government, “The lockdown was imposed on March 24 and it was the duty of every owner and administrator of every hotel, guesthouse, hostel and similar establishment to maintain social distancing. It looks like social distancing and quarantine protocols were not practised here.”

“Now, it has come to our knowledge that the administrators violated these conditions and several cases of Corona-positive patients have been found here,” it said.

It was stressed that strong action would be taken against those in charge of the establishment. “By this gross act of negligence, many lives have been endangered. It was the responsibility of every citizen to proactively avoid such a gathering of people during the lockdown and this is nothing but a criminal act,” read the statement.

It was stated that after the Centre informed the Delhi government about the first positive patient at the Markaz and requested assistance, it moved all symptomatic patients to its medical facilities and as a safety precaution, all non-symptomatic contacts have been moved to the quarantine centres.