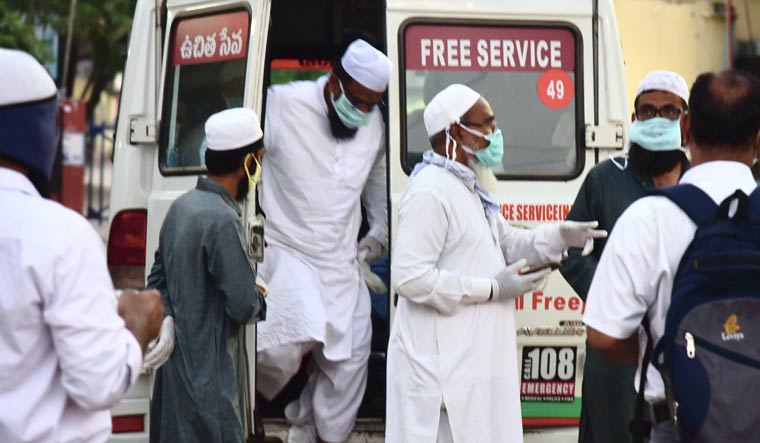 Hyderabad: 18 persons from Nalgonda and Miryalaguda, who attended the religious congregation at a mosque in Delhi's Nizamuddin area, are brought to a fever hospital for COVID-19 test, in Hyderabad, Tuesday, March 31, 2020 | PTI

Coronavirus has no address. But Markaz Nizamuddin in Delhi is being seen as a COVID-19 hotspot after the international headquarters of the Tablighi Jamath hosted thousands of people from various Indian cities and across the world for a religious event beginning March 13.

While the government swung into action as soon as the positive cases cropped up in Telangana, Srinagar, Delhi and other cities, drawing links to preachers who had travelled to various parts of the country carrying the virus and causing a medical emergency, the reality is that the Union home ministry still does not have an exact count of the number of foreigners who attended the event and brought the COVID-19 to Markaz Nizamuddin.

The reasons are many. The Tablighi Jamath group has, over the years, not been sharing its list of visitors with security agencies nor has it maintained a logbook of its visitors. In the absence of any immediate data available, the security agencies have identified 1,000 foreign TJ workers, of which 600 are quarantined, 20 tested positive and one died. Out of the total 2,000 Indian TJ workers identified, 100 are quarantined and seven have died so far.

Security officials said that the TJ preachers have been visiting the country in violation of visa norms. They have been travelling on a tourist visa, which is now making it difficult to trace all the places they visited. The concerns about religious preachers coming into India on tourist visas have long plagued the Indian intelligence agencies. The foreigners division of the Union home ministry has been looking into the issue for the last few years, reiterating time and again that the preachers who come to attend religious meetings and congregations need to apply for a business visa or a conference visa.

The preachers who came to India on a tourist visa are now facing the danger of being blacklisted for flouting visa norms. But before that, the home ministry needs to have a complete database on their identities, their places of stay and visit and to draw their links to the event at Markaz.

Tracing and testing is the approach adopted by the health departments across the states as the Union home ministry has shared details of foreign and Indian TJ workers with all the state governments. This list was shared on March 21 after COVID-19 positive cases among these workers first surfaced in Telangana.

The Union home ministry on Tuesday said, ''Swift action was taken with a view to identify, isolate and quarantine the TJ workers who might be COVID-19 positive. Instructions were also issued by the MHA to Chief Secretaries and DGPs of all states as well as Commissioner of Police, Delhi.''

Interestingly, the Intelligence Bureau also sent advisories to state DGPs on March 28 and 29. Meanwhile, officials said that the TJ workers staying in the Markaz in Nizamuddin were also persuaded for medical screening by the state authorities and police. According to an official statement issued by the MHA, 162 TJ workers have been screened and shifted to quarantine facilities by March 29.

''So far, 1,339 Tabligh Jamaat workers have been shifted to Narela, Sultanpuri and Bakkarwala quarantine facilities as well as to LNJP, RGSS, GTB, DDU Hospitals and AllMS, Jhajjar. Rest of them are being currently medically screened for COVID-19 infections,'' it said.

The MHA admitted that all foreign nationals visiting India as part of the TJ team come on a tourist visa. The ministry, however, maintained that it had issued guidelines that they should not indulge in missionary work. The law enforcement agencies will now separately examine the categories of visas of all these foreign TJ workers and take further action in case of violation of visa conditions. 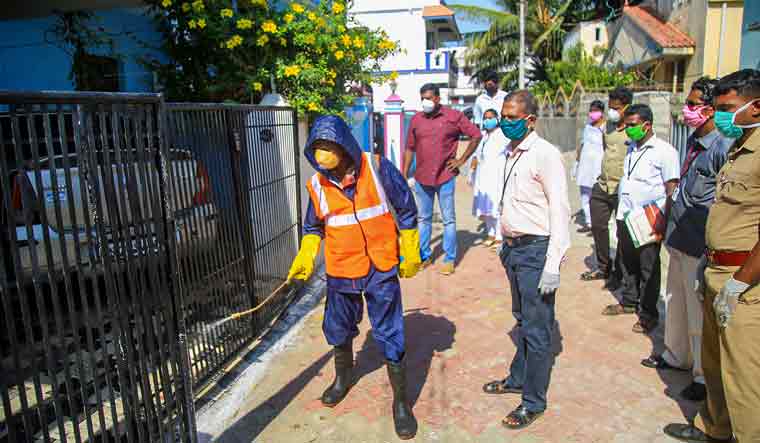 Nagercoil: The house of a person, who attended the religious congregation at a mosque in Delhi's Nizamuddin area, being sanitised at Velladichivila near Nagercoil, Tuesday, March 31, 2020 | PTI

The Markaz Nizamuddin issued a statement on Tuesday saying that all its programmes were decided a year in advance in order to facilitate visitors from far off places. When Prime Minister Narendra Modi announced the Janta Curfew for March 22, the ongoing programme in the Markaz was discontinued immediately. However, due to sudden cancellation of rail services across the country the next day, a large group of visitors who had to depart by train got stuck in the Markaz premises.

When the lockdown was subsequently announced on March 23, the Markaz said, it did not leave any chances of these visitors availing road transport for their journey back home.

''Despite this challenging situation, with the help of Markaz administration, around fifteen hundred visitors left Markaz Nizamuddin by availing whatever meagre transport was available,'' it said.

It further said that the Markaz premises were used by the stranded visitors with prescribed medical precautions.

''It is relevant to indicate here that the lists of 17 vehicles with registration numbers, along with the names of the drivers plus their licence details, were submitted to the district authorities so that the stranded visitors and guests could be ferried towards their destination. The requisite permission is still awaited,'' it added.

The Markaz also said that rumours started doing the rounds on social media alleging that COVID-19 patients were present at its premises.

''Markaz Nizamuddin never violated any provision of law, and always tried to act with compassion and reason towards the visitors who came to Delhi from different states. It did not let them violate the medical guidelines by thronging ISBTs or roaming on streets,'' it said.

The authorities at the Markaz also said that they have been cooperating with the administration and security agencies upholding law and have even offered its entire premises as a quarantine facility.

The war on coronavirus seems to have got a new entrant for now, if not a new address, but the blame game continues.