In Maharastra, the COVID-19 toll is now 4 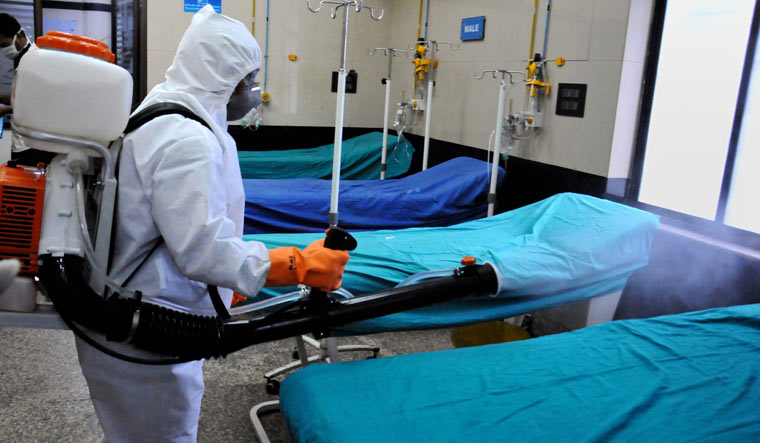 A health worker sprays disinfectants on a hospital bed in the wake of coronavirus pandemic, in Kolkata | PTI

A 47-year-old man, admitted at the Indore government hospital as a coronavirus suspect, died on Thursday, reported PTI. His test reports are awaited. The man was earlier treated at the Ujjain civil hospital and was admitted to the Indore hospital on Wednesday with symptoms of breathlessness. The patient did not have a travel history.

At the same time, the test report of a woman who died on March 24 turned out positive for coronavirus, taking the COVID-19 death toll in Maharashtra to four. The woman, who hailed from Navi Mumbai, had symptoms similar to the coronavirus infection. Thus, as a precautionary measure, her samples were taken and sent for testing. "The test came out positive this morning. We are now taking the necessary precautions for her relatives as well,"a health official told PTI.

The number of coronavirus cases climbed to 649 and the death toll due to COVID-19 rose to 13, with one death reported each from Gujarat, Tamil Nadu and Madhya Pradesh, according to the health ministry.

A 70-year-old man, with co-morbid conditions of diabetes and cardiac issues, died on Thursday making it Gujarat’s third COVID-19 death. On Wednesday night, an 85-year-old woman lost her battle to COVID-19 at Ahmedabad's Civil Hospital.

The number of positive cases in Gujarat stands at 43. Ahmedabad has reported highest number of 15 cases so far, followed by Vadodara 8, Surat and Gandhinagar 7 each, Rajkot 4 and, Kutch and Bhavnagar 1 each.

Of the five latest cases that have come to the fore, three were locally transmitted and two have had a history of travel to the United Kingdom and New Delhi.

-with inputs from PTI, Nandini Oza