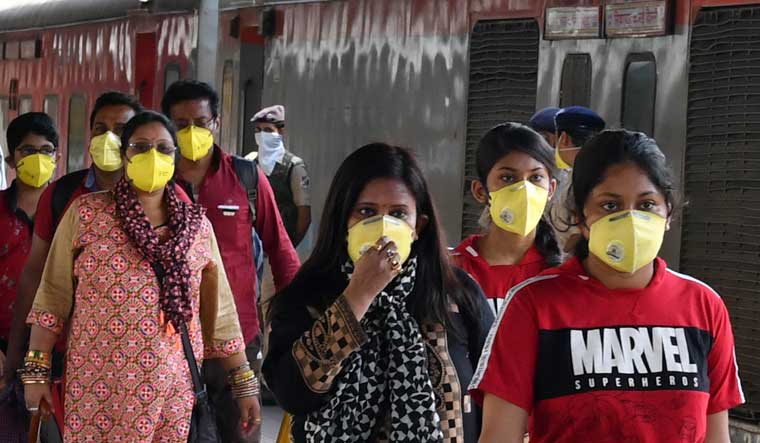 After the “overwhelming response” to Sunday’s ‘janta curfew’, the Centre has decided to continue the lockdown in 75 affected districts to contain the spread of COVID-19, and asked states to identify exclusive hospitals for treating patients affected by the virus.

The attempt to keep the affected districts under lockdown, exempting essential services, is to break the chain of transmission, officials said.

“Increased inflow of international passengers has prompted us to take certain actions. Isolation is the best strategy to break the chain of transmission. Virus is not in the air, but transmits very effectively through droplets; it transmits very fast,” said Dr Balram Bhargava, director general, Indian Council of Medical Research (ICMR).

Health ministry said that it was hard to say whether community transmission had begun in the country or not. “We can start mathematical models only when we have community transmission. Whether it has started yet, or not, is hard to say. By Tuesday, we will have some idea on the best case, worst case and normal case scenarios. We have to do this because we need to assess the demand for testing kits in the country,” said Dr Raman R. Gangakhedkar, head of epidemiology and communicable diseases, ICMR.

On the issue of testing, Bhargava said that indiscriminate testing needed to be avoided. “The test could be positive anywhere between 2-14 days after contact. If someone tests negative today, they could test positive after 5 days or 7 days, and test negative after 14 days,” he said. Only symptomatic cases should be tested, he said.

Five per cent of cases need supportive treatment, and new drugs are being tried out. “It’s (drugs) not a magic wand, people are dying in various countries,” he said. He added that isolation is the best strategy. “In the last one week, we have tested 5,000 samples. We are capable of testing 50,000-70,000 per week in the government system,” Bhargava said, citing numbers from other countries. “France is doing 10,000 tests per week. The UK is doing 16,000, the USA is doing 26,000 and South Korea is doing 80,000 per week,” he said.

Sixty private laboratories have also been brought on board. Bhargava said that it took the ministry time to bring them on board because safety of lab personnel and handlers had to be ensured, and the scale up was planned as the inflow of international traffic increased. “Pricing of the test was never an issue,” he clarified.

Bhargava said several medicinal combinations were being proposed, few randomised trials were being done, and it was still unclear as to what the efficacy of the anti-malaria drugs that were being experimented as of now was. Several anti-viral drugs were available in the country and stocks were being augmented, he said.

The government has recently ordered 1,200 new ventilators, said Lav Agarwal, joint secretary of the health and family welfare department, adding that the government would take necessary action depending on the evolving situation.

“State governments will issue orders allowing only essential services to operate in districts with confirmed COVID-19 cases. The focus should be on closure of all activities except essential services such as hospitals, telecom, medicine shops, provision stores etc. Establishments/factories engaged in manufacturing and distribution of essential commodities such as medicines, vaccines, sanitizers, masks, medical devices, their ancillaries and support services etc should be exempt from these restrictions,” he said.

States have been further asked to ramp up the readiness to manage the positive cases in health facilities, officials added. States will also be assessing the availability of medical services including quarantine and scale them up to meet all possible contingencies. States have been asked to have earmarked facilities fully dedicated to manage COVID-19 cases only. Each state has been requested by the Centre to identify and ensure that such hospitals are equipped to manage the COVID-19 situation.