Savarkar vs Ambedkar vs Jinnah: Battle over road names at JNU

According to JNU administration, it was decided last year to name road after Savarkar 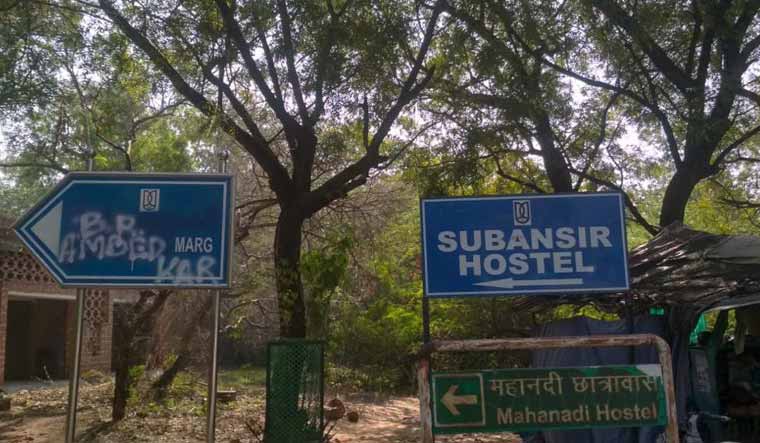 The sign board of V.D. Savarkar Marg that was spray painted with name of B.R. Ambedkar | Twitter handle of Saimon Farooqui

The move by the Jawaharlal Nehru University administration to name a road inside the campus after Hindutva ideologue V.D. Savarkar on Sunday has triggered a controversy.

The road going towards the Indian Institute of Mass Communication, Delhi, from the university campus was renamed, according to Saket Moon, vice president of the JNU Students' Union.

"Earlier, the road didn't have any name. But on Sunday night, we saw that it had been named as V.D. Savarkar Marg," Moon said. JNUSU president Aishe Ghosh slammed the move, terming it a "shame" that Savarkar's name had been put in the university.

According to registrar Pramod Kumar, the decision to name the road after Savarkar was taken at the executive council meeting on November 13.

Interestingly on Monday, activists of the National Students Union of India (NSUI) claimed they had changed the name of the road from V.D. Savarkar Marg to B.R. Ambedkar Marg, in honour of the architect of the Indian Constitution.

Saimon Farooqui, national secretary of the NSUI, tweeted images of the V.D. Savarkar Marg signboard with spray paint on it. Farooqui tweeted on Tuesday, "Yesterday @nsui JNU held protest against naming a street in JNU as V.D. Savarkar Marg. They changed the name of the Marg to B.R. Ambedkar Marg. We will always continue to uphold the values of nation builders and not nation dividers."

Surprisingly, on Tuesday morning, a poster saying 'Mohammad Ali Jinnah road' appeared at JNU, with an image of the founder of Pakistan. The rightwing ABVP claimed the Jinnah road poster was the handiwork of the leftwing JNU Students Union.

Neeraj Kundan, national president of the NSUI, claimed the Jinnah poster was put up by the ABVP to "spread hatred". Kundan tweeted, "Savarkar was a traitor & will always be remembered as a traitor only. Jinnah pic was placed by abvp workers just to spread hatred among students fraternity.

@nsui condemns on it. Cctv footage is easily available from administration ...”

Last year, controversy had erupted in Delhi University after the ABVP-led students' union there had installed a statue of Savarkar without permission from authorities. It was removed later by the students' body.