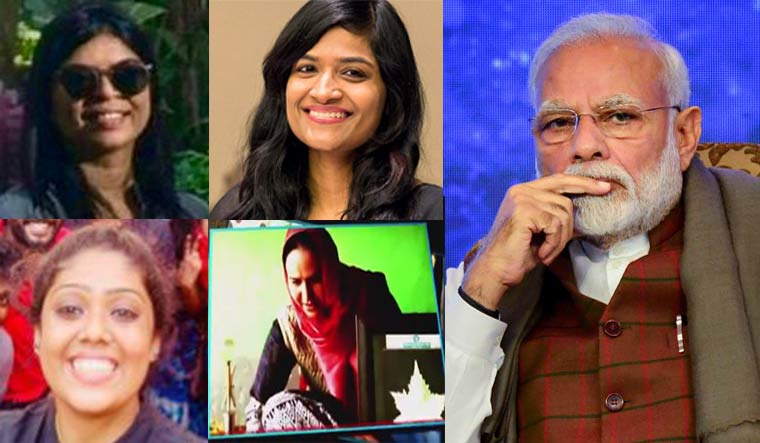 PM Modi handed over his Twitter and Facebook accounts to seven women, saying they have done great work in a wide range of sectors and their struggles and aspirations motivate millions.

In a unique social media initiative, Prime Minister Narendra Modi on Sunday handed over his accounts on various platforms to seven woman achievers from different fields to share their life journeys and messages on the International Women's Day.

From a farmer to activists working in the fields of sanitation, disability rights, water conservation and fighting hunger to somebody dedicated to reviving Kashmir handicraft industry, women used Modi's accounts  which enjoy a huge following, to share their stories and spread their messages.

Known for his imaginative communication initiatives, the prime minister handed over his accounts on platforms like Twitter and Facebook to these women, saying they have done great work in a wide range of sectors and their struggles and aspirations motivate millions.

"As I'd said a few days ago, I'm signing off. Through the day, seven women achievers will share their life journeys and perhaps interact with you through my social media accounts. Let us keep celebrating the achievements of such women and learning from them," he said in his tweets.

The seven women were drawn from different parts of the country and came from varied backgrounds.

The women chosen to use Modi's accounts included Sneha Mohandoss, who works to eradicate hunger, Malvika Iyer, who survived a gruesome bomb blast that blew off her hands and damaged her legs when she was 13 and is now a motivational speaker, disability activist and model, and Arifa Jaan from Kashmir who promotes traditional crafts of Kashmir.

Others were Kalpana Ramesh, a water conservator, Vijaya Pawar, who promotes handicrafts from the Banjara community of rural Maharashtra, Kalavati Devi of Kanpur, who collects money to build toilets, and Veena Devi, who is from Munger in Bihar and made her name by growing mushrooms under her bed due to lack of space.

"Where there is a will, there is a way. Anything can be achieved with willpower. My real recognition came from cultivating one kilo of mushrooms under bed. This not only made me self-sufficient but also gave me a new life by boosting my self-confidence," said Veena Devi, who now trains other women.

"I feel empowered when I do what I'm passionate about! I wish to inspire my fellow citizens, especially women to come forward and join hands with me. I urge everyone to feed at least one needy person and contribute to a hunger free planet," Mohandoss tweeted from Modi's handle.

While sharing their stories and messages from Modi's personal handle, these women also responded to some of the message they received.

"It is a fantastic way to throw light on ordinary women wanting to accomplish extraordinary work," Kalpana Ramesh said when a Twitter user registered her appreciation of the entire exercise.

The Twitter handle of Prime Minister's Office has 32 million followers.

In September 2019, PM Modi was the third-most followed world leader on the microblogging site, behind only US President Donald Trump and his predecessor Barack Obama.

The prime minister was the first Indian to cross the 50-million-followers mark on Twitter.