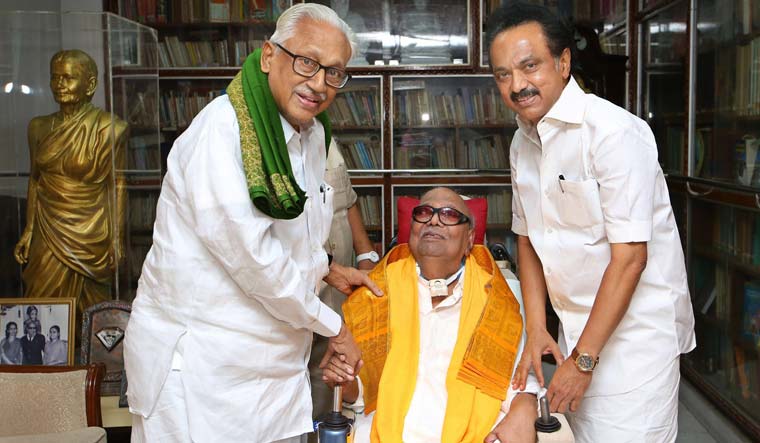 DMK general secretary Kalyanasundaram Anbhazhagan, aka K. Anbhazhagan, died at Apollo Hospitals in Chennai at 1am on Saturday. He was 97 and is survived by two daughters and a son born through his first wife.

Anbhazhagan had served as MLA for nine terms and as Lok Sabha MP for one term. DMK president M.K. Stalin has announced mourning for a week following the death of Anbhazhagan. All DMK events will be postponed for a week and party flags will fly at half-mast. With his death, the era of Dravidian stalwarts comes to an end in Tamil Nadu.

Drawn into politics as a student by the fiery speeches of E.V. Ramasamy (aka Periyar, the founder of Dravidar Kazhagam) and then by C.N. Annadurai, Anbhazhagan always played an active role in Dravidian politics.

Born on December 19, 1922, as Ramaiah at Kattoor near Myladuthurai in Tamil Nadu, Anbhazhagan was a very close associate of former DMK leader M. Karunanidhi. He changed his name to Anbhazhagan and joined Annamalai University in Chidambaram to study Tamil. His father, M. Kalyanasundaram, was a staunch Congressman, who ran a khadi store in Mayiladuthurai. Later, his father left the Congress along with Periyar to be part of Dravidar Kazhagam. It was then the family moved from Myladuthurai to Chidambaram to ensure a good education for Anbhazhagan and his brothers.

Popularly known as Perasiriyar (professor), Anbhazhagan had a MA degree in Tamil. He was a lecturer of Tamil in the Pachaiyappa’s College and served for 13 years, between 1944 and 1957.

Though he had differences of opinion with Karunanidhi, Anbhazhagan was always close to the DMK patriarch and maintained a constructive relationship for over four decades. He was the general secretary of the DMK for 43 years and a MLA nine times. He has also held positions as minister of social welfare, health, education and finance.

In an emotion-filled obituary for Anbhazhagan, Stalin said "his erudition will guide the journey of the DMK." Stating that he took solace in the fact that Anbhazhagan was alive when his father died, Stalin said, "who will I look up for advice now? How will I comfort myself?"