Marandi returned to the BJP after 14 years 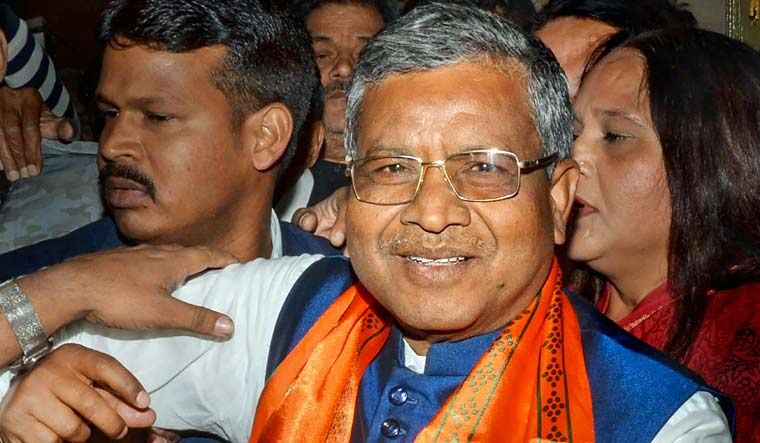 Prominent tribal leader Babulal Marandi became the first chief minister of Jharkhand after the state was carved out of Bihar in 2000. However, he stayed as CM for three years, as BJP brought in Arjun Munda to replace him owing to organisational bickering. In 2006, Marandi, who belongs to Santhal community, launched his own party Jharkhand Vikas Morcha. He carved out a place for this regional outfit as he was considered a key leader in the state. Senior BJP leaders including Amit Shah had been asking him to return to the party but he stalled such efforts saying it was still not the time. BJP suffered set back in the 2019 state elections and felt a need to engage with the tribal population. As Santhal community is spread from Jharkhand to neighbouring Bihar, West Bengal and Assam, Marandi may help the party to keep the tribals engaged with them. He will also be projected as a counter to CM Hemant Soren from the Jharkhand Mukti Morcha who also belongs to Santhal community. Given Marandi's standing among the community, he is also likely to remove misgivings among the tribals owing to the CAA/NPR/NRC. He joined BJP in a massive rally in presence of Home Minister Amit Shah in Ranchi.

Q: You left BJP and now you returning after 14 years. Why?

A: It is not that I suddenly left and now returned after the BJP lost in state elections. This is not the case. Even though I had left, but the BJP had not given up its efforts to bring me back. Many people expressed their opinion that now was the time to return. In the last 14 years, we have seen the country's politics from close quarters. Most of the political parties are associated with a family. There is no ideology. I have never felt comfortable family-based parties. BJP is a cadre-based party and has an ideology which suits a person like me. It is a cadre-based party so not many changes take place.

Q: The Citizenship and NRC issue is finding resonance even in Jharkhand. Do some tribals appear to be apprehensive?

A: Unnecessary politics is being done on the Citizenship Law. And those who continue to play politics over it for some more time they will be discredited as people will reject them. That is why you will see that no big leader is jumping into it. Even Rahul Gandhi does not want to. Even in the case of Shaheen Bagh, Arvind Kejriwal did not go as he understands it, though some of the second rung leaders of his party may have gone.

For NRC, let us take the example of Assam. There may have been some mistakes there. A large number of tribals from here have gone and settled there. I am still associated with them and I keep going there. I contacted them and even called some youth from there. I asked them if they faced any trouble. They said no. Many Santhals are settled in Kokrajhar, they have not faced any problem. Some people are just trying to scare them.

Q: In 2015, BJP experimented with picking up CMs in Maharashtra, Jharkhand and Haryana who did not belong to the dominant caste of those states. Did BJP face backlash because of that in last assembly elections?

A: I don't think so. In a democracy, these things should not apply. Some caste-based parties may do so, but to strengthen democracy we should stay away considerations like caste, community. We should think about the leader. He should be universally acceptable this what the party should always think about.

Q: Your return to BJP is also linked to bringing tribals into the party fold.

A: It is not that. People are looking at my journey. Though I belong to the tribal community, most of the elections I have fought have been on general seats. I am not denying that I belong to this community. So my aim will be to associate more people of the community to the party as this is how our success will be gauged. If you leave the 1998 and 1999 Lok Sabha elections, all other elections I have fought are from general seats where the tribal population has been limited. Even today I represent non-reserved seat.

Q: Country is witnessing a polarised polity. You also merged your party into a bigger entity. What does it mean for regional parties.?

A: Most of the regional parties are based on caste. The growth of caste-based political parties has been faster and massive in the country. But the leader who has tried to stay above caste his influence has not been as much. Look at the results of states like UP, Bihar.

Q: Another issue which usually comes up for debate tribal culture and Hindutva. Efforts are done to integrate tribals into Hindu mainstream, but some say they have a separate identity. How do you see it?

A: One will not find a definition of Hinduism. Not even in Ramayana or Mahabharata. To create an identity we have to use it (definition). Hinduism is a way of life. We have not been able to convey ourselves to them (tribals). The day we are able to teach them about Hinduism, then there won't be any problem. In Hindus, there is no one way to pray or one god. In the same way, as I belong to the Santhal community, and is a Marandi so we have separate deities from Tudus. There is so much diversity. Its only Hindu thought that takes into account so much diversity. The day we are able to convey the meaning to all, you will see there will be no problem.

Q: Elections are coming up in Bihar. You think Jharkhand verdict will have any impact. Will you begin campaigning?

A: All states are different. They don't impact each other. The electorate has become very mature. Look at Delhi elections, how much votes each party got in Lok Sabha, but it was different when elections were held to assembly. It is for the party to decide where they want to depute me for the campaign. I am more keen to travel.