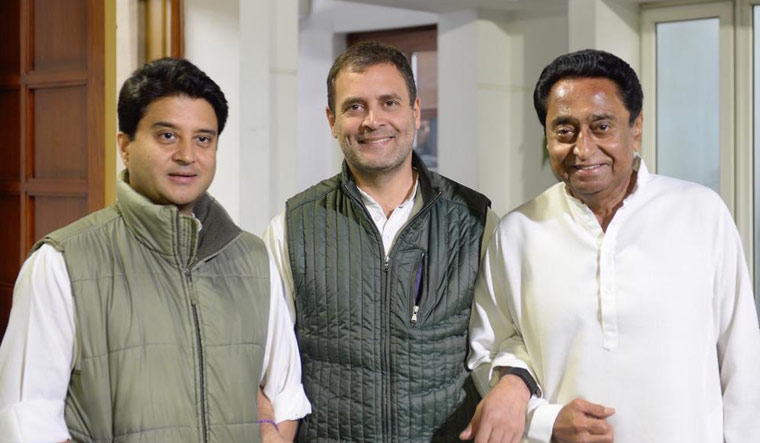 Rahul along with Kamal Nath and Jyotiraditya Scindia | Twitter

Reacting to Congress leader Jyotiraditya Scindia's threat that he would hit the streets if the party's manifesto is not fulfilled in Madhya Pradesh, Chief Minister Kamal Nath said the former is free to do it.

The bad blood between the two had come to the fore again when Scindia recently warned agitation against the government in the state if it fails to fulfil the promises of loan waiver and regularising the jobs of guest teachers. "I want to tell the guest teachers. I heard your demand before assembly elections in Madhya Pradesh. I want to assure you that your demand already stands underlined in our party's government's manifesto," Scindia had said, adding, "But the government has its speed...Our teachers have to keep a bit of patience. Our turn will come. I assure you. Even if does not come, don't worry I will become our shield and sword."

"If all promises in the manifesto are not fulfilled, do not think you are alone. Scindia will also hit the streets with you," the Congress leader had said.

"Toh utar jayein sadak par (Let him hit the streets if he wants to)" news agency ANI quoted the chief minister, who is in the national capital for the Madhya Pradesh Coordination Committee meeting, as saying.

The Kamal Nath government is currently struggling to fulfil its promises of farm loan waiver up to Rs 2 lakh in the state. The government needs around Rs 50,000 crore for the farm waiver, according to officials.

On Friday, the chief minister had said, "Manifesto is for five years, right? It is not for five months."