Who is Hafiz Saeed, and what does his conviction in Pakistan mean for India?

He is widely considered the mastermind of the 2008 Mumbai attacks 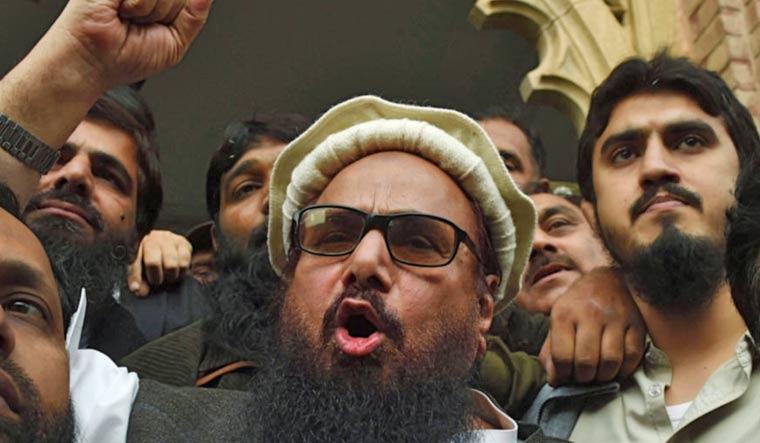 Hafiz Saeed, the mastermind behind the 2008 Mumbai attack and the Jamat-ud-Dawa (JuD) chief, was sentenced to 11 years in two terror financing cases on Wednesday, four days ahead of a crucial meeting of the Financial Action Task Force (FATF) in Paris where Pakistan will present its case to escape from being blacklisted. Saeed, a UN designated terrorist whom the US has placed a $10 million bounty on, was arrested on July 17 in the terror financing cases. The 70-year-old fiery cleric is lodged at the high-security Kot Lakhpat jail.

Anti-terrorism court Judge Arshad Hussain Bhutta sentenced Saeed and his close aide Zafar Iqbal to five and a half years each and imposed a fine of Rs 15,000 in each case. A total of 11 years sentence will run concurrently. Saeed and Iqbal were sentenced in two cases registered against them in Lahore and Gujranwala cities on the application of the Counter Terrorism Department (CTD) of Punjab police. Iqbal is the secretary of Al-Anfaal Trust.

"Saeed remained calm and cool when the ATC judge announced the verdict," a court official told PTI. Talking to reporters, Saeed's counsel Imran Fazal Gill said the verdict against the JuD chief was an outcome of the pressure of the FATF.

"We are disappointed over the ATC verdict and will challenge it in the LHC," he said. He said all the prosecution witnesses presented in the court could not prove any allegation against Saeed and Iqbal. "This ATC verdict against Saeed and Iqbal has been given on weak grounds and we are hopeful to get relief from the high court," Gill said. The crackdown on Saeed's outfit last year followed a warning by the international terror financing watchdog to Pakistan to deliver on its commitments to curb terror financing and money laundering.

Who is Hafiz Saeed

Hafiz Saeed is a mysterious figure at best. Various reports have claimed that he was originally born in Shimla before migrating to Punjab in Pakistan. His father, as his entire family, was an Islamic scholar. According to a report in Newsweek Pakistan, Saeed graduated from Sargodha Government College and did his postgraduate in Arabic and Islamic Studies from Punjab University. The report also claimed that he participated in Jamaat-e-Islami election campaigns, that he was appointed lecturer at Lahore’s University of Engineering and Technology in the Islamiat Department, and that he graduated from King Saud University in Saudi Arabia.

Most recently, he was chosen to spearhead ISIL-K province, which is also known as 'ISIL's South Asia Branch', 'ISIL Khorasan', 'Islamic State's Khorasan Province' and 'South Asian Chapter of ISIL', as its first emir. According to the terrorism backgrounder of ISIL-K on the website of Washington-based non-profit policy research organisation Centre for Strategic and International Studies (CSIS), Saeed will head the ISIL-K province. Saeed, a veteran TTP (Tehreek-e-Taliban Pakistan) commander, brought along other prominent TTP members including the group's spokesman Sheikh Maqbool and many district chiefs when he initially pledged allegiance to al-Baghdadi in October 2014. ISIL-K's early membership included a contingent of Pakistani militants who emerged in Afghanistan's Nangarhar province around 2010, just across the border from the former Federally Administered Tribal Areas (FATA) of Pakistan. Many of these militants were estranged members of TTP and Lashkar-e Islam, who had fled Pakistan to escape pressure from security forces.

Saeed is no stranger to Afghanistan. He has reportedly fought with the Afghan mujahideen, and it was there that he reportedly came into contact with Osama bin Laden and Al Qaeda on multiple occasions. He had later found the Lashkar-e-Taiba (literally meaning Army of the Pure), which—after a stint in Afghanistan—turned its main focus to "liberation of Kashmir".

After the Indian Parliament attack, Pakistan banned the LeT in 2002; but, it rebranded as the JuD, along with a charity arm by the name of Falah-e-Insaniyat (Welfare of Humankind). Because of the scope and work of his charity, Saeed remains a hugely popular figure in Pakistan. After the 2008 Mumbai terror strikes, Saeed had come under the radar of the Western agencies, particularly the US. One reason was Saeed's growing networks of influence. Another was the death of six US citizens in the attack.

The United States has designated Saeed a terrorist and offered a $10 million reward for information leading to his conviction. He was later placed under house arrest in Pakistan.

In 2018, during the time of the Pakistan national elections, Saeed had entered the political arena, floating a political party named 'Milli Muslim League'. But, Pakistan's electoral commission barred the outfit from contesting, citing an interior ministry recommendation that the MML was "affiliated" with the LeT, "a militant group blamed for the 2008 Mumbai attacks that killed 166 people, and that such groups could breed violence and extremism in politics". His candidates contested under a different banner, but failed to win any seats.

His outfit is known for inflammatory speeches. In June 2018, Maulana Bashir Ahmad Khaki, a senior JuD functionary, had called for the 'flag of Islam' over the US, and the disintegration of India. "JuD cadres are still waging jihad in Kashmir and fighting with Indian forces in Kashmir. They are waging jihad for freedom of Kashmir and destruction of India. I urge participants to raise flag of jihad against infidels," he added. "I appeal participants to donate generously (wheat, ration and cash) during the month of Ramadan to JuD and for mujahideen' waging Jihad. I also urge women to donate their sons and cash for mujahideen who were waging jihad in Kashmir," he said. Calling himself a messenger of LeT chief Hafiz Saeed, Maulana Bashir said, "Flag of Islam will be hoisted in India and America. Modi will be killed. India and Israel will get disintegrated as more and more martyrs will be produced."

The verdict comes four days ahead of the crucial meeting of the FATF from February 16 to 21 in Paris where Pakistan will present its case to get itself off the Grey List. The FATF in October last decided to keep Pakistan on its 'Grey List' for its failure to curb funnelling of funds to terror groups like LeT and Jaish-e-Mohammad. If not removed off the list by April, Pakistan may move to a blacklist of countries that face severe economic sanctions, such as Iran.

Since Pakistan continues to be in the FATF 'Grey List', it would be very difficult for the cash-strapped country to get financial aid from the IMF, the World Bank, ADB and the European Union. The FATF is backed by the UN Security Council passed resolutions which made its recommendations binding and in case of deficiencies, sanctions could be imposed.

What does his sentencing mean for India?

Saeed-led JuD is the front organisation for the LeT which is responsible for carrying out the 2008 Mumbai attack that killed 166 people, including six Americans. It has been a long-standing Indian demand that he face the music. Pakistani-American LeT operative David Headley, involved in the Mumbai attacks, had reportedly claimed that joined LeT after being influenced by Saeed. He underwent his first training with the terror outfit in 2002 at a camp in Muzaffarabad, which is in Pakistan-Occupied Kashmir.

The United States has praised Pakistan's jailing of the alleged mastermind of the 2008 Mumbai attack, a step long sought by Washington as well as India. "The conviction "of Hafiz Saeed and his associate is an important step forward—both toward holding LeT accountable for its crimes, and for Pakistan in meeting its international commitments to combat terrorist financing," tweeted Alice Wells, the top US diplomat for South Asia.