'It's the beginning of new kind of politics,' says Kejriwal as AAP sweeps Delhi polls 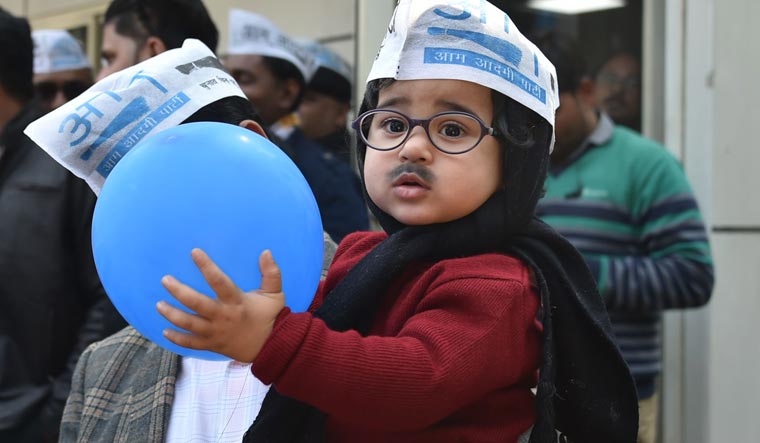 "Delhiites, you have done an amazing thing. I love you," Chief Minister Arvind Kejriwal said on Tuesday as his Aam Admi Party registered a landslide victory in the assembly elections, pushing the Bharatiya Janata Party to a distant second and leaving the Congress virtually decimated in the capital.

The AAP almost replicated its fairy-tale victory of 2015 in a keenly-watched battle in the middle of anti-CAA protests. According to the final votes tally released by the Election Commission, the party won in 62 constituencies with a voting percentage of 53.57, while the BJP got eight seats with vote share of 38.51 per cent. The Congress, which had maintained a low-profile and lackluster campaign, drew a blank as most of the exit polls predicted. The AAP had bagged 67 seats in 2015.

“A new kind of politics has emerged from the Delhi Assembly polls,” Kejriwal said, addressing the party workers at the AAP headquarters. People have rewarded the party which built schools, hospitals and provided cheap electricity round-the-clock, he added.

“Delhiites have given birth to a new kind of politics, which is called "Kam ki rajniti" (politics of works)," said Kejriwal, who was accompanied by his family and senior party leaders Gopal Rai and Sanjay Singh.

Carrying blue and white balloons, buntings and giant cut-outs of Kejriwal, hundreds of AAP workers celebrated at the party office and grooved to the tunes of the party's campaign song - 'Lage Raho Kejriwal', while the offices of both the BJP and the Congress wore a deserted look.

"It is the beginning of new kind of politics today. This is very auspicious message for the country and the politics of work can only take our country to the 21st century," Kejriwal said.

The AAP's stupendous victory comes nearly eight months after it suffered a severe drubbing in the Lok Sabha polls in which the party drew a blank while the BJP won all the seven seats.

A total of 672 candidates, including 593 men and 79 women, were in the fray for the hotly contested elections held on Saturday.