Chinmayanand vs law student: HC says not sure who exploited whom

Both of them used each other, Justice Rahul Chaturvedi said 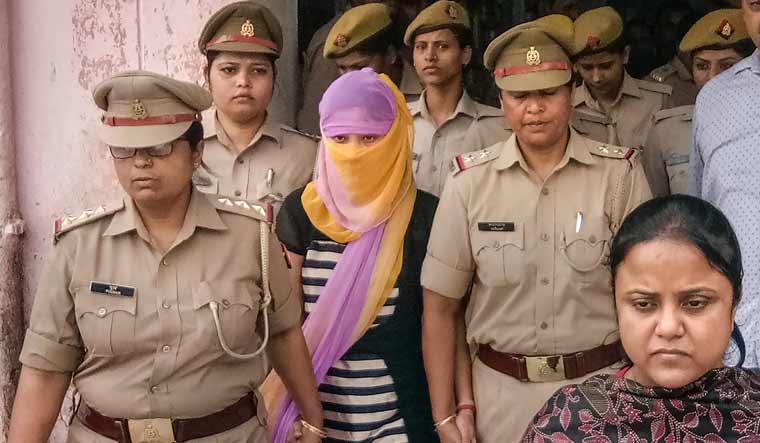 [File] The woman law student (face covered), who alleged BJP leader Chinmayanand of sexual misconduct and harassment, is seen outside a government hospital after a medical examination, in Shahjahanpur | PTI

The Allahabad High Court has said it is difficult to determine who exploited whom in the case in which former Union minister Swami Chinmayanand is accused to sexual abusing a law student.

In fact, both of them used each other, Justice Rahul Chaturvedi said on Monday while granting bail to the BJP leader, accused of sexual exploitation of the student for several months.

The judge also transferred the case to a trial court in Lucknow, noting the woman's apprehension that the BJP leader could infringe with the law if the case is heard in his hometown Shahjahanpur.

Chinmayanand, whose trust runs the Shahjahanpur law college where the woman studied, was arrested on September 20 under section 376-C of the IPC, a charge short of rape.

It is applied when someone in authority takes advantage of his official position to "induce or seduce" a woman to have sex with him.

In a parallel case, the woman was charged with trying to extort Rs 5 crore from Chinmayanand, whom she had accused of rape. The high court granted her bail on December 4.

In Monday's order granting bail to Chinmayanand, Justice Chaturvedi took note of the allegations that the woman and her three friends tried to blackmail the politician with the videos she shot while giving massages to the politician.

The woman has, however, alleged that she went to Chinmayanand under threat from his goons. She had then started using a spy camera to make video clips.

The judge also noted material on record indicating that she and her family members enjoyed the patronage and benevolence of the politician.

In the present scenario where this court finds that it might be a case of quid pro quo, the intriguing question arises whether the applicant be granted bail or not? the judge noted.

As pointed out earlier, that both the parties crossed their limits and at this stage it is very difficult to adjudicate as to who exploited whom?  In fact, both of them used each other, the bail order said.

It is also noticeable that there is also nothing on record that during the period of the alleged atrocities committed upon Miss A she made any complaint or even any whisper to her family members against the accused applicant, the order said.

The judge said at this juncture the court draws the conclusion that it was a complete matter of quid pro quo.

But over a span of time there was greed to extract more and the woman tried to blackmail Chinmayanand through the obscenic videos recorded by her, the court observed.

The judge, however, directed the trial court that no observation made while passing the bail order should affect it in its own proceedings.