'Enemy submarines' were near Indian bases after Pulwama? 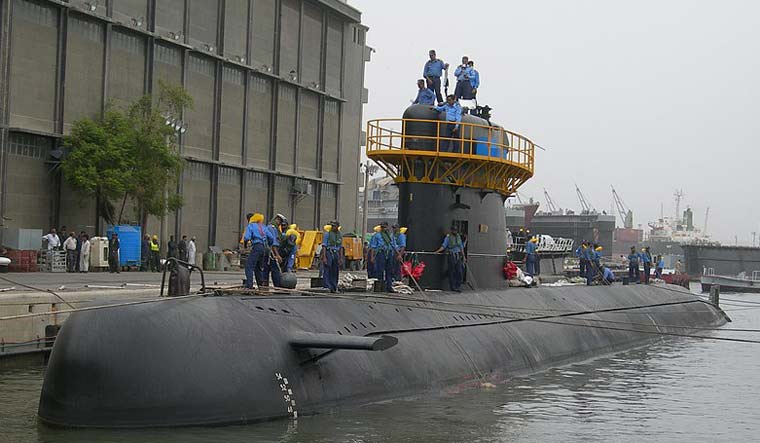 The PNS Hamza, an Agosta-90B submarine of the Pakistan Navy | Wikimedia Commons

Citations for gallantry awards are typically perceived as being full of 'boilerplate' text about bold actions and valour. But occasionally, interesting and intriguing snippets emerge in the citation.

This was the case with the citation for Commodore Jyotin Raina, the Fleet Operations Officer, of the Western Fleet of the Indian Navy. Raina was recently awarded the Nao Sena medal.

The citation notes that in the aftermath of the surge in tension between India and Pakistan after the Pulwama suicide bombing in February 2019, Raina had shown “professional excellence, promptitude, vision and personal leadership of high standards, ensured that the Western Fleet re-oriented and was ready in all respects for meeting all operational tasks within a very rapid time frame".

The citation notes that Raina's bold actions ensured the "turnaround" of Indian Navy ships "despite presence of enemy submarines off own harbours". It noted Raina's actions were "based on conscientious planning and an intrinsic calculated risk-taking ability and was achieved through the formulation of an alternate routing, ensuring concurrent turnaround of Western Fleet ships at various ports.”

The Western Fleet was at the forefront of the Indian Navy's operational deployment after the Pulwama attack. The Navy announced in March 2019 it deployed a carrier battle group centred around the aircraft carrier INS Vikramaditya, the nuclear submarine INS Chakra and other surface ships and submarines.

In April 2019, The Hindustan Times quoted intelligence officials as saying that only one of Pakistan's five diesel-electric submarines were operational. "...four of its navy’s five operational units undergoing major refit and repairs," The Hindustan Times reported. At the time, Pakistan had five French-origin submarines. Three of these were the newer 'Agosta 90B' class and two were of the 1970s-vintage 'Agosta' class.

The Agosta-90B submarines were all commissioned after 1999 and feature an 'air-independent' propulsion system. Air-independent propulsion frees the submarine from the need to use its diesel engines to recharge its batteries, giving it increased underwater endurance.

The Hindustan Times claimed an older Agosta class submarine "PNS Hurmat, commissioned in 1980," was partially operational at the time of the Pulwama crisis.

In June, ANI reported that soon after the Indian Air Force attacked Balakot, the PNS Saad, an Agosta 90B class submarine, "vanished” from Pakistan waters. "[From] the location near Karachi from where the PNS Saad vanished, it could reach the Gujarat coast in three days and the headquarters of the western Fleet in Mumbai within five days and was seen as a major threat to the security of the country," ANI then reported.