The party's messaging deals mainly with a selection of national issues 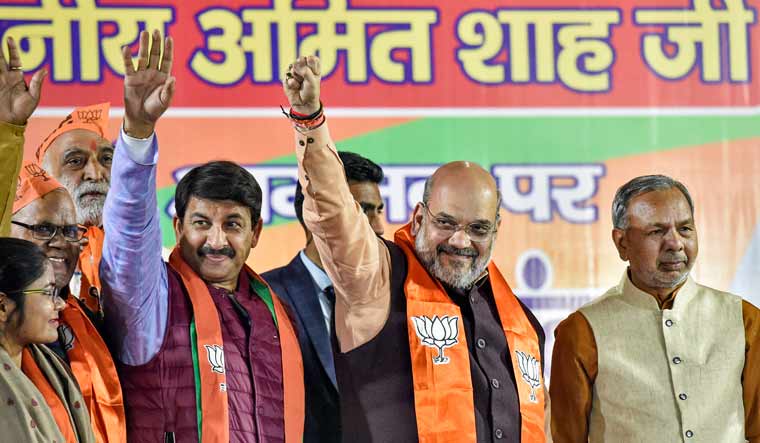 With the stakes high for the BJP in the Assembly elections in Delhi, Union Home Minister Amit Shah has thrown himself into an extremely intensive campaign routine in the national capital, going hyper-local with a messaging that is largely national.

Shah, who along with BJP President J P Nadda, has personally monitored his party's preparation and campaign strategy for the February 8 election, has already held several meetings, big and small, covering the seven Lok Sabha constituencies in the capital city.

Shah's intense involvement with the BJP's electioneering for the state polls has ensured that the Delhi BJP leaders Nadda, election in-charge Prakash Javadekar and state in-charge Shyam Jaju have been on their toes, and present at the BJP bigwig's events.

The campaign plan is in sync with the BJP's strategy to hold a large number of meetings in Delhi, both big and small, going deep down into the constituencies. The party plans to hold around 12,000 nukkad sabhas and other public meetings, which will be addressed by senior leaders, including Shah. And while the idea is to go hyperlocal in terms of reach, the party's messaging deals mainly with a selection of national issues, the foremost being the recently enacted Citizenship Amendment Act, followed by abrogation of Article 370, ban on instant Triple Talaq and Ram Temple.

In his speeches, Shah has adopted an aggressive posture on CAA and attacked the incumbent AAP and the Congress for instigating anti-CAA protests. “Anti-India slogans were raised in JNU and Modiji put those responsible in jail. Permission is required of the Delhi government to prosecute them but it is not being given (by the Kejriwal government). If Kejriwal Ji comes to seek votes, tell him to first give permission for their prosecution... These are the people who caused riots in Delhi,” Shah said at an election rally.

Shah has also taken on the Kejriwal government on local issues, questioning the claims made by the incumbent with regard to the work done in areas such as education and healthcare. He has also attacked the AAP regime over 'unclean' drinking water and the non-implementation of Ayushman Bharat scheme in Delhi.