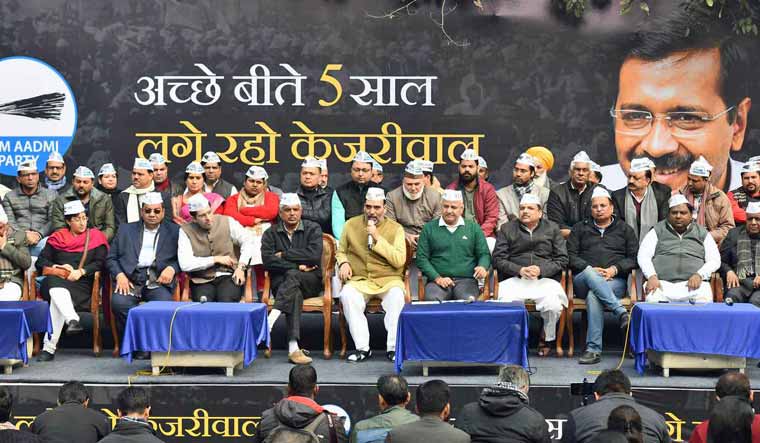 The Aam Aadmi Party sounded the bugle for the Assembly polls in Delhi today as it formally launched its poll campaign and unveiled its slogan for the elections, which relies on the brand value of Chief Minister Arvind Kejriwal — “Acche Beete 5 Saal, Lage Raho Kejriwal” (Five years were very good, carry on Kejriwal).

“Five years back, we went to the people of Delhi, asking for their votes with the promise of improving the situation with regard to healthcare, education, water and power supply. We promised them good governance and an honest government. Five years later, when we have gone back to the people, the response we have got from them is that the five years have been very good,” said Deputy Chief Minister Manish Sisodia as he launched the party's campaign and unveiled the slogan.

He said the slogan has been derived from the response of the people, which is that the last five years have been very good and they want Kejriwal to be chief minister again.

The ruling AAP has begun its electioneering for the Assembly polls in right earnest, and the launch of the campaign slogan will be immediately followed by a series of outreach events. For two days, beginning tomorrow, padayatras will be held in all 70 constituencies of Delhi. This will be followed by the release of the government's report card by Chief Minister Kejriwal on December 24. The AAP leaders and workers going to the people with the government's report card, the door-to-door campaign that aims at covering 35 lakh houses, starting on December 25. AAP MLAs will hold Mohalla Sabhas in all Vidhan Sabha seats for around 15 days. Also lined up are seven town hall meetings, which will be addressed by senior party leaders. The AAP has joined hands with Prashant Kishore's I-PAC in carrying out its election campaign for the 2020 elections.

Enlisting the work done by the Kejriwal government, AAP's senior leader Sanjay Singh, who is in charge of the Delhi elections for the party, said that the people want to vote for AAP again because it has fulfilled its promises by bringing in a vast change in the condition of government schools, by bringing healthcare to the people through Mohalla clinics, by providing them with the cheapest electricity in the country, by giving them free water supply etc.

“Our critics say that the AAP government is trying to buy the votes of the people through freebies. Did they want Kejriwal to spend money instead, on buying helicopters and planes for himself? We have always put the common man's issues above everything else,” he said.

AAP's Delhi Convenor Gopal Rai recalled the party's campaign slogan for the previous Assembly elections — 'Paanch Saal Kejriwal' (Kejriwal for Five Years), saying the new slogan takes off from the same sentiment in reposing faith in the leadership of Kejriwal, this time based on the work done by his government.