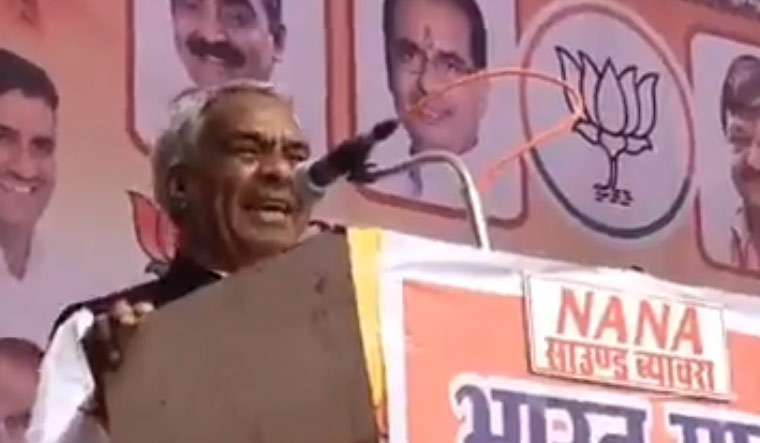 In a meeting held by the BJP to protest the alleged high-handedness of the Rajgarh district collector in dealing with party workers, BJP ex-minister Badrilal Yadav made an obscene comment against the lady collector, Nidhi Nivedita.

Bhargava also said that but for the constitution, the collector would have been doing ‘chulha-chouka’ (cooking at home).

The comments, which were met with uproar from the Congress and that have gone viral on social media, overshadowed the BJP’s efforts to use the meeting to show its strength and demand the resignations of Nivedita and SDM Priya Verma.

Congress party spokesman Narendra Singh Saluja said that the statements, made in the presence of top BJP leaders who smiled throughout Yadav’s speech, shows BJP’s mentality. “They abused and assaulted the lady officers during the rally (of January 19), showed that they had least regard for women and when it was not enough, they organized a protest meet today, simply with the aim of further insulting and abusing the officers. They only speak of behan-beti (sister-daughter) on the face, but their actual mentality and attitude towards women is evident,” Saluja said to THE WEEK.

The meet was organized to protest the alleged high-handedness of two lady officers of Rajgarh against BJP workers during a pro-CAA rally in Biaora on January 19. The collector was seen slapping and pushing some BJP workers in a rally, while SDM Priya Verma was also seen physically restraining them.

However, there were also videos of protestors pulling Verma’s hair and kicking her, which went viral. The Congress has charged the BJP with physically and verbally abusing lady officers and preventing them from discharging their duty. FIRs were registered against 17 BJP workers involved in the protest.

Madhya Pradesh: FIR registered against two persons for hitting and pulling hair of Rajgarh Deputy Collector Priya Verma during a demonstration held by BJP workers in support of #CAA in Rajgarh yesterday. One accused arrested. https://t.co/jqGhpBcGDJ

Speaking at the meet, Vijayvargiya, who had earlier made the news for threatening government officers, said that “JNU virus had come to Rajgarh” and added that he had come to know that the Rajgarh collector was a JNU alumnus. He said that the insult of the BJP workers was due to this virus and that this virus has to be finished off democratically. He warned that the CM (Kamal Nath) should take action on the officers, else the BJP was capable of doing it. “If officers can punish, we can do so too. We are not ones to perish, but ones who make others perish,” Vijayvargiya said.

Shivraj Singh Chouhan said that such collectors were a slap on the face of democracy and added that the officer had no right to slap the protestors. “Don’t be so full of ego, else we would crush the ego into the soil,” he said.

The BJP has meanwhile sought to make a big issue of the incident and leaders have been issuing statement after statement against the officials and Congress government. The protest meet on Thursday was held to demand that an FIR be lodged against collector and SDM for assaulting BJP workers.

Another Congress spokesman, Pankaj Chaturvedi told THE WEEK that he wanted to ask the ex-chief minister Shivraj Singh Chouhan whether he was standing in favour of people who were insulting and assaulting sisters and daughters of the state and nation and who had the least regard for the honour of women.

“The behaviour against the women, even if officers, during the rally by abusing, pulling hair, kicking them and now such obscene comment that cannot even be repeated. Is Chouhan standing in favour of this? He should self-analyse. It is not about politics or about Congress or BJP. Politics keeps happening. But this is about honour of sisters and daughters of state and nation and the BJP is not keeping up this honour,” Chaturvedi said.

Earlier, before leaving for Biaora, ex-CM Chouhan made another controversial comment when he said that public relations minister Sharma and higher education minister Jitu Patwari were not fit to be ministers. Chouhan said that power had gotten into heads of Congress leaders and they have forgotten basic ethics.

Ministers Sharma and Patwari had issued statements in favour of Rajgarh officers. Retorting, Patwari said that it was CM Kamal Nath who would decide his (Patwari’s) eligibility as minister. “I am younger to Shivraj-ji in every way and I am ready to take up his positive suggestions if he has any,” Patwari said while speaking to media.

Meanwhile, the Indore bench of MP High Court has issued a notice to Rajgarh collector Nidhi Nivedita in context of the incident during the pro-CAA rally of January 19. The notice came in response to a public interest litigation filed by one Harshvardhan Sharma of Indore.

In another development, the Madhya Pradesh Prashasnik Adhikari Sangh—association of state administrative service officials—came out in support of the two female officers of Rajgarh and demanded adequate protection for executive magistrates (SDM and above ranked officers) owing to the nature of their work.