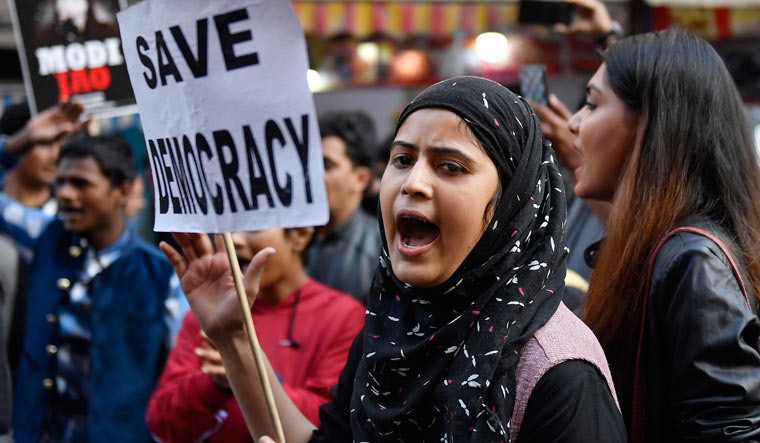 As a sit-in against the Citizenship (Amendment) Act (CAA) continued in Badwali Chowki area of Indore for the third day on Friday, two policemen, including a senior officer, were shunted out following an alleged baton charge on protesters the day before.

Additional Superintendent of Police Guruprasad Parasher was "line-attached" (transferred) to the police headquarters in Bhopal, an official source said.

Earlier, the ruling Congress had assured that action would be taken against the police officials responsible for alleged baton charge on Thursday night.

The sit-in protest is going on against the Citizenship Act and the National Register of Citizens (NRC) in the Muslim-dominated Badwali Chowki area.

"I was told that six or seven persons were injured during a baton-charge on Thursday night. Chief Minister Kamal Nath has expressed concern about it," state Congress spokesperson Shobha Oza told reporters at the protest site.

"We condemn the use of force on protesters and assure that the incident will be probed and whichever police personnel is found guilty, appropriate action will be taken," Oza said.

“The chief minister had already made it clear that anti-constitutional provisions of the CAA or the NRC will not be implemented in the state,” she said.

According to eyewitnesses, heated arguments took place between the police and protesters, following which the police resorted to a baton charge.

Home Minister Bala Bachchan blamed the trouble on "outsiders" who tried to get involved in the protest, and said the police used force to control the situation.

A probe has been ordered and action will be taken against those found responsible, he said.

The protest at the Jama Masjid ground intensified after Friday prayers with people, many of them carrying the tricolour, shouting slogans against the CAA and the NRC.

Garment trader Samia Ali, one of the protesters, told PTI, "The Centre is pushing the CAA and the NRC to divert people's attention from core issues like economic slowdown, unemployment and inflation. CAA should be withdrawn and NRC should never be implemented in the country.”