J&K: All restrictive orders to be reviewed in a week, says SC

Centre had justified the restrictions claiming it was for preventive purposes 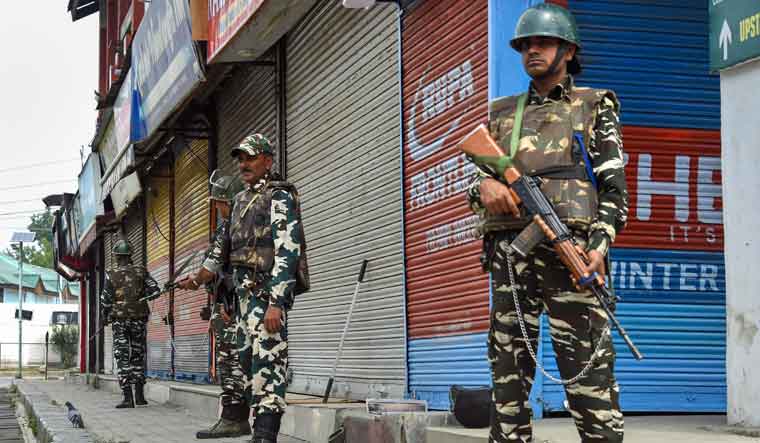 Security personnel stand guard during restrictions to maintain law and order, in Srinagar, on Friday | PTI

The Supreme Court, in a significant verdict, ordered that all restrictive orders within Jammu and Kashmir—which includes Section 144 and internet curbs—be reviewed within a week. The court was hearing a batch of pleas, including that of Congress leader Ghulam Nabi Azad, challenging the restrictions imposed in the erstwhile state of Jammu and Kashmir following abrogation of provisions of Article 370. A bench of Justice N.V. Ramana, Justice R. Subhash Reddy and Justice B.R. Gavai had reserved the judgement on November 27 last year.

On November 21, the Centre had justified restrictions imposed in Jammu and Kashmir after the abrogation of provisions of Article 370 and said that due to the preventive steps taken, neither a single life was lost nor a single bullet fired. Besides Azad, the apex court had heard the petitions filed by Anuradha Bhasin, Executive Editor of Kashmir Times, and few intervenors questioning restrictions in the valley. The Centre had referred to terror violence in the Kashmir valley and said that for the past so many years terrorists were being pushed through from across the border, local militants and separatist organisation had held the civilians captive in the region and it would have been "foolish" if the government would not have taken preventive steps to secure the lives of citizens.

Bhasin, in her petition, had sought a directive for the Centre and the Jammu and Kashmir administration to immediately relax all restrictions on freedom of movement of journalists and media personnel in Kashmir and some districts of Jammu.

The directive was sought to enable media personnel to practise their profession and exercise their right to report in furtherance of their rights under Articles 14, 19 (1) (a) and 19 (1) (g) and 21 of the Constitution as well as the right to know of the residents of the Kashmir valley, the petition said.

In the petition, the editor said that since August 4, all connectivity was shutdown leaving Kashmir and some districts in Jammu completely isolated and cut-off from all possible modes of communication and information. Most forms of connectivity, apart from the internet, had since been restored.

Earlier, in August 2019, the apex court had refused to interfere with the restrictions, including the communication clampdown in Jammu and Kashmir, saying that reasonable time should be given for bringing normalcy in the sensitive situation and posted the matter for hearing after two weeks.