Ahead of polls, Kejriwal releases report card of Delhi government 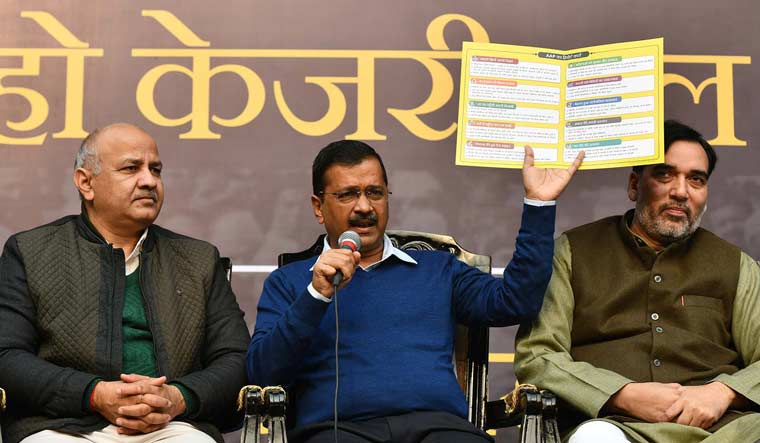 As his maiden term draws to an end and the next Assembly elections are round the corner, Delhi Chief Minister Arvind Kejriwal on Tuesday released his government's 'report card' for the work it has done in the last five years, especially in the areas of education, healthcare, electricity, water, safety of women and the development work carried out in unauthorised colonies.

“We are 'sevaks' of the people since in a democracy the people are the rulers. And hence it is our responsibility to present the report card of the work that we have done to the people,” Kejriwal said unveiling the report card, which will form the basis of a mega outreach campaign to be carried out by the party in the coming days.

At an event at the AAP headquarters, Kejriwal, flanked by his cabinet colleagues, and with his MLAs in attendance, said, “Five years ago, the people of Delhi gave ordinary men and women like us a historic mandate. Today, I am happy that we have made them proud with our achievements.”

The report card highlights the achievements in the field of education, which includes transforming the schools run by Delhi government. Kejriwal pointed out that the budget for education has been increased from Rs 6,600 crore to Rs 15,600 crore, and more than 20,000 new classrooms were built in the last five years. He said that the results of the government schools were now better than that of the private schools in the capital.

The second most important area for the government, Kejriwal said, was healthcare. He said the health budget was increased under his government's tenure from Rs 3,500 crore to Rs 7,500 crore. He enlisted initiatives such as opening more than 400 Mohalla Clinics, improvement in the condition of government-run hospitals and the success in bringing down the number of dengue cases.

The report card mentions bringing down electricity rates and water charges. It claims that the electricity bill of around 35 lakh consumers is now zero after 200 units have been made free.

In a bid to counter rival BJP's pitch involving the regularisation of unauthorised colonies, which saw Prime Minister Narendra Modi address a rally on December 22, Kejriwal spoke about the development work conducted by his government in such colonies.

Kejriwal said Rs 8,000 crore have been spent in carrying out development works in unauthorised colonies. He said in 1,281 out of 1,797 such colonies, roads have been constructed, piped water has been made available in 1,554 such colonies, and sewer lines have been laid in 1,130 of them.

“It is easy to talk about unauthorised colonies at Ramlila Maidan. But it is difficult to do the work,” Kejriwal said, apparently referring to Modi's rally.

Among the other issues that the report card touches upon are the steps taken to enhance safety of women, improving public transport, the much-touted doorstep delivery system, installing free Wi-Fi hotspots and the scheme to provide senior citizens with free pilgrimage.

The report card also highlighted that Delhi's budget has almost doubled – from Rs 31,000 crore to Rs 60,000 crore, and that it was the only revenue surplus state in the country.

The report card will form the basis of a door-to-door campaign to be launched on December 26, which will cover 35 lakh houses. This will be accompanied by seven town hall meetings and Mohalla Sabhas in all the 70 Vidhan Sabha constituencies.