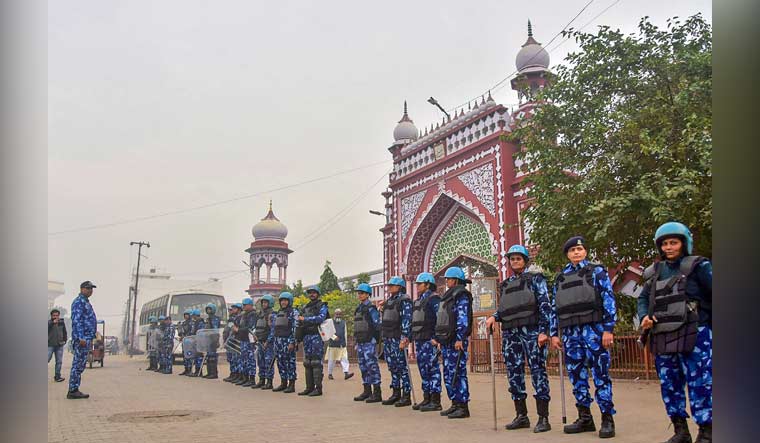 A letter purporting to be from the students, teachers and non-teaching staff of Aligarh Muslim University (AMU) states that Vice-Chancellor Tariq Mansoor and Registrar S. Abdul Hamid have been ‘expelled’, giving him a deadline of January 5 to vacate or face boycotts.

Speaking to THE WEEK, Hamza Sufiyan, Vice President of the AMU Student Union for the 2018-19 term, denied any link between the AMUSU and the letter. “The student’s union does not take responsibility for this note. It has been issued by someone anonymously. It has no signatures.”

The letter states that “...by the collective authority of the students, the teaching faculty and the non-teaching staff of the university, the incumbent Vice-Chancellor Prof. Tariq Mansoor and Registrar Mr S. Abdul Hamid are hereby EXPELLED from their respective positions. Through this, we notify them to vacate the V.C. Lodge and Registrar’s lodge till January 5, 2020.”

The letter adds, “Failing to do so, the students, teachers and the non-teaching staff shall boycott the university administration until they resign and vacate their positions. No activity shall take place in the campus until they have left the campus.”

The letter ends with a line saying its has been signed by the students, teachers and non-teaching staff of Aligarh Muslim University—but does not include any signatures.

Replying to a post on the letter, the Aligarh Muslim University Journal also stated that it is unofficial.

Sufiyan added that both students and alumni have been critical of the VC’s behaviour, with calls from multiple alumni associations for his resignation.

On December 15, following demonstrations against the Citizenship (Amendment) Bill, a clash between police and students prompted the UP police to enter the university campus. Lathi charges and tear gas were reportedly deployed inside the campus. At least 60 students were injured in the clashes, with 26 people arrested, with the incident prompting the university to be closed until January 5.

Three days after the incident, VC Mansoor appealed for calm, justifying the decision to allow the police to enter the campus. “Out of 26 arrested persons, only seven were university students and it has been proved that anti-social and outside elements intermingled with the students and were determined to damage the university property and jeopardise life and career of bona fide students.”

The police action in AMU came the same day that hundreds of police officers entered the Jamia Millia University campus in Delhi.

Letters from AMU alumni associations in Saudi Arabia, Bahrain and Qatar, have condemned the university administration's decision to allow the police into the campus.

The Aligarh Muslim University Alumni Association in Jazan, Saudi Arabia condemned the “brutal attack on AMU and JMU students” and called for immediate action against the VC, Registrar and Proctor. The AMU Association in Qatar issued a similar letter, demanding the resignation of the same officials and calling for the release of all detained students as well as a high-level inquiry into and legal action against “guilty police officers”. Likewise, the AMU Alumni Association in Bahrain demanded immediate action from the AMU Chancellor against the aforementioned three officials.

AMU announced an official inquiry into the clash on Sunday, to be conducted by the former Chief Justice of Himachal Pradesh and Uttarakhand High Court Justice V.K. Gupta. Gupta has three months to submit his report.

VC Mansoor said that the inquiry would be conducted fairly and that it would not interfere with any other official probe. "We are not interested in suppressing any fact and that is why we have taken such a prompt decision to ensure speedy justice," he said.

Internet services in Aligarh that were snapped on the day of the police actions were restored on Sunday. The District Magistrate had then justified the internet shutdown, saying that after the protests in AMU, “some anti-social elements can incite violence among the people using internet services to circulate inflammatory messages or content on social media”.

On December 19, over 500 AMU teachers took out a protest march against the CAA.

With inputs from Puja Awasthi