Local politicians Ashu Khan, Mustafa and Haider were others named in the FIR 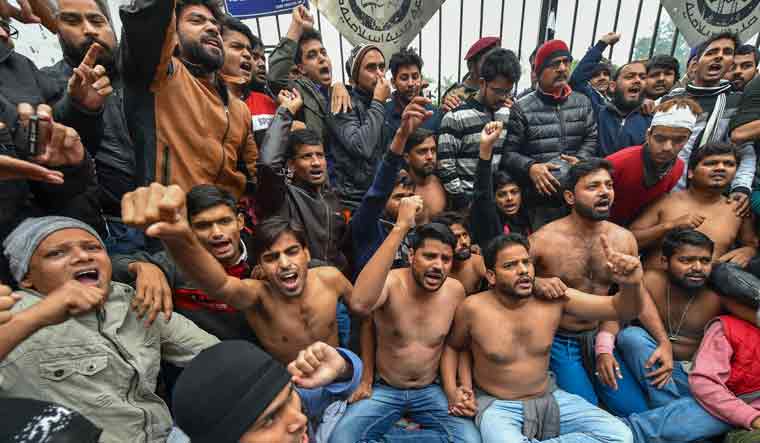 The Delhi Police filed an FIR against three Jamia Millia Islamia students in connection with Sunday's violence in the area around the varsity. The FIR was filed against seven persons, including former Congress MLA Asif Khan. The other six accused persons have been identified as local politicians Ashu Khan, Mustafa and Haider, AISA member Chandan Kumar, SIO member Asif Tanha, and CYSS member Kasim Usmani.

The Jamia Millia Islamia university had turned into a battlefield over the past three days as police entered the campus, using force, following protests against the Citizenship Amendment Act (CAA) which devolved into violence and arson. In response, several protests—some peaceful, some violent—erupted across India against the Jamia crackdown and the controversial citizenship law, as students and political leaders took to the streets. Prime Minister Narendra Modi called these protests "deeply distressing" and appealed for peace. The lines between anger at the police action against Jamia students and the protests over the Citizenship Amendment Act, which will grant citizenship to non-Muslim refugees from Pakistan, Afghanistan and Bangladesh, blurred into a unison of protests—from Uttar Pradesh to Kerala, and Maharashtra to West Bengal.

According to the FIR, police got information that several people will stage a protest march against the amended citizenship law till Parliament House and President House. There was heavy deployment of police near the university. Around 3pm, several protestors, including men, women and local politicians, came from the university side, it said. Former MLA Asif and Ashu were instigating the protestors and raising slogans, according to the FIR. The protestors were raising anti-CAA and anti-NRC slogans and were heading towards Mathura Road. The protest turned violent and protestors started pelting stones on policemen and also set DTC buses on fire, the FIR stated. Police were constantly asking the protestors to maintain peace, but they did not pay heed towards the repeated requests. They also vandalised CAT ambulances near the university, it stated.

On Monday. thousands of students took to the streets in the national capital on Monday against the police crackdown. Fifty detained students of Jamia were released even as the situation in the campus remained tense with scores of hostel students leaving for home. Several students of Delhi University boycotted exams and held protest outside the Arts Faculty in North Campus even as a large number of police personnel were deployed by authorities to prevent any flare up. Braving freezing cold, agitated students, some of them shirtless, protested outside the gates of JMI university. Slogans of 'Inquilab Zindabad' rent the air as the students took out a march, demanding a CBI inquiry into the alleged "police brutality". Slogans of "Delhi Police down down" and Tanashahi nahi chalegi were being raised. Police had put up barricades to prevent students from reaching the Amar Jawan Jyoti where a Preamble reading event was scheduled.