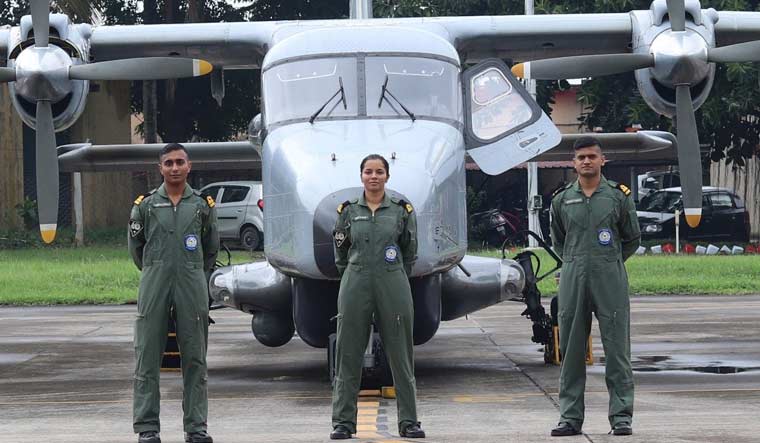 Making a crack in the glass ceiling that seemingly prevents women from taking up some kinds of jobs, a 24-year-old engineering graduate from Muzaffarpur in Bihar began operational duties on Monday as the Indian Navy's first woman pilot.

Sub lieutenant Shivangi earned her 'wings', marking formal induction into the Indian Navy, at a ceremony at the naval air station in Kochi on Monday. Shivangi will be flying the German-designed Dornier 228 maritime patrol and rescue aircraft.

Shivangi was profiled by CNN ahead of her entry to service. Shivangi told CNN, "It's a very big thing... It's a big responsibility for all of us and I know that I have to do well."

Shivangi told reporters that her curiosity about flying started when as a 10-year-old, she saw a helicopter carrying a minister. Shivangi obtained a degree in mechanical engineering from Sikkim Manipal University of Technology. Like all pioneers, Shivangi almost lost her chance of making history. She had cleared the Service Selection Board (SSB) test to join the Indian Navy, but did not get a call due to lack of vacancies.

Shivangi then joined the Malaviya National Institute of Technology to pursue an M.Tech degree. Shivangi saw another Navy recruitment presentation and attempted the SSB test again, which she cleared. Shivangi opted out of the M.Tech degree to join the Navy in 2018.

Shivangi did her orientation course at the Indian Naval Academy at Ezhimala and then proceeded to six months of flight training at the Air Force Academy. This was followed by training on the Dornier aircraft for six months in Kochi.

Shivangi explained to CNN her work flying the Dornier would involve "certain rescue missions, and according to the requirement, medical evacuation and all those things, so I'll be a part of all those missions".

Shivangi told The Hindu her dream is to fly the US-built Boeing P-8I maritime patrol aircraft. The P-8I is heavier and more advanced than the Dornier.

Shivangi will soon be joined in Navy service by two other women pilots. Sub lieutenants Shubhangi and Divya will get their wings by the end of December after undergoing training with the Indian Air Force, reports The Hindu.