Why Congress wants its own MLA Aditi Singh disqualified

Congress fumes as the young leader goes against party line 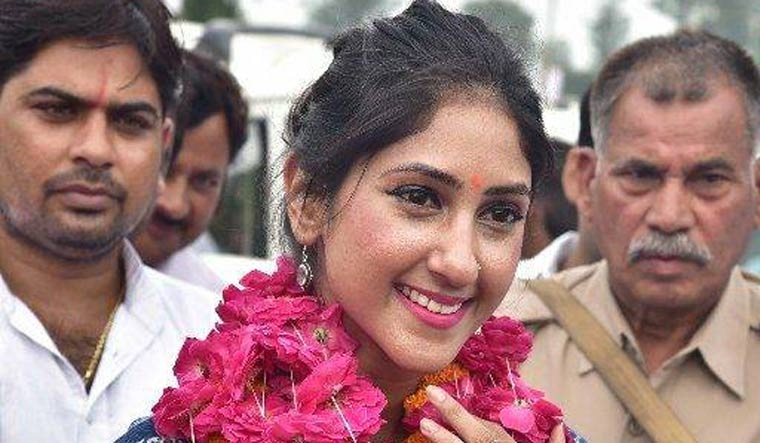 It was barely a week ago that Aditi Singh, the Congress MLA from Rae Bareli in Uttar Pradesh, married her party colleague from Punjab, Anand Saini. The wedding was held as per Hindu rituals first, in Delhi on November 21, and on November 23, as per Sikh rituals, in Nawanshahr.

The young MLA had sparked off a social media storm last year after her photographs along with Rahul Gandhi and her family went viral. Social media was abuzz with reports suggesting that the Congress leader had finally found his soulmate. Aditi, however, clarified that Rahul was like “an elder brother” to her.

The 32-year-old lawmaker has asserted that her marriage in no way would weaken her spirit to work for the welfare of the people of her constituency. However, she has been having a frayed relationship with the party for quite some time. On Tuesday, the Congress submitted a petition to Speaker Hriday Narain Dixit, seeking her disqualification from the Legislative Assembly.

The rare move came after Aditi failed to respond to a show-cause notice issued by the party twice, after she defied whip and attended a special session of the Vidhan Sabha on October 2. She had skipped a road show led by Priyanka Gandhi in Rae Bareli to attend the session which the Congress-led opposition had boycotted.

“Traitors of the party should resign”—the banners held aloft by protesting Congress workers read, after Aditi gave Priyanka's visit to her constituency a miss.

After attending the session, Aditi rubbed more salt into Congress's wound by praising Chief Minister Yogi Adityanath for the “development” of her constituency. A day later, she was given Y-plus security by the state government.

Her relation with the party worsened after she openly endorsed the Narendra Modi government's decision to scrap provisions of Article 370 and bifurcate the state of Jammu and Kashmir into two Union territories.

Her frequent meetings with Adityanath and her presence at the special assembly session had triggered speculations that she might join the saffron party.

Will he join the BJP? Being the daughter of five-time MLA Akhilesh Pratap Singh, who passed away recently, politics is not alien to Aditi. Her father, who was known as the 'Robin Hood of Rae Bareli', was elected from the constituency on a Peace Party ticket and as independent candidate, before joining the Congress.

Aditi made her debut in politics in 2017 and contested the Uttar Pradesh Assembly election on a Congress ticket to defeat her nearest contender (Bahujan Samaj Party candidate Shabaj Khan) by over 90,000 votes.

Before joining politics, Aditi was involved in social work. She was educated in Delhi and Mussorie, and later attained her degree in management from Duke University in the US.