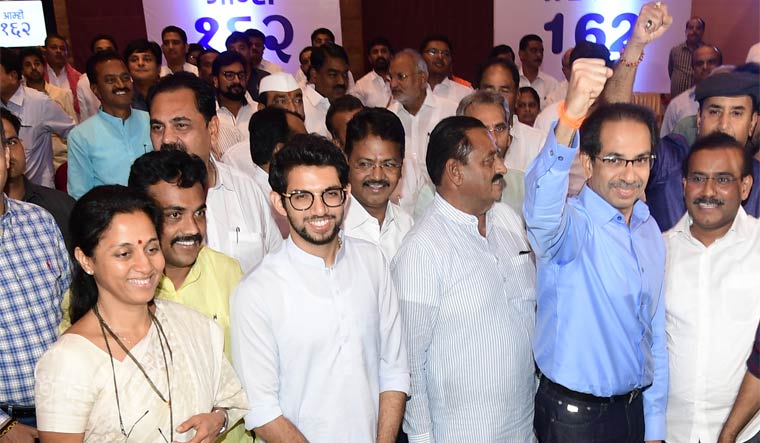 In a combined show of strength, the Shiv Sena, the Congress and the Nationalist Congress Party have “paraded” their 162 legislators at a five-star hotel in Mumbai even as the Supreme Court is all set to deliver its verdict on Tuesday on a petition filed by the three parties against the formation of government by the BJP in the state.

The move, unprecedented in Indian politics, is seen as an attempt to disprove the claims made by the BJP that they had the support of 170 MLAs in the 288-member Assembly.

“We will live by Satyameva Jayate,” said Thackeray, addressing the MLAs. “This is Chhatrapati Shivaji's Maharashtra, The more you try to break us, the more we will unite,” he further said.

Pawar sought to remind the BJP that Maharashtra is not Goa. "In a 288-member house, 162 MLAs present here. Many others have also supported us but we have not yet taken it on paper so we won't disclose their names now," he said.

Pawar also sought to allay the fears of the NCP MLAs that they would lose their membership in case Ajit Pawar issues a whip, urging them to vote for the BJP during floor test.

"I have come to the conclusion that Ajit Pawar, who is removed from his position (as the NCP legislature party leader for joining hands with the BJP in forming a government), has no legal right to issue a whip to MLAs," he said.

Later the MLAs took a pledge that they would be honet to their party. The pledge was read out by NCP leader Jitendra Awhad. 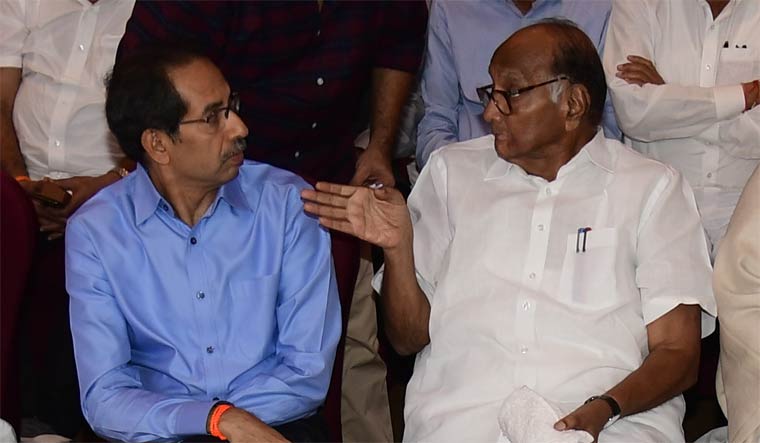 "We are all one and together, watch our 162 together for the first time at grand Hyatt at 7 pm, come and watch yourself @maha_governor,” Raut tweeted.

An NCP leader told PTI that the motive behind the move was to turn the public perception towards them. “Once we parade 162 MLAs in one hall, the entire nation will come to know that BJP is playing a dirty game in Maharashtra by misusing office of the governor," he said.

MLAs of the three-party alliance, which calls itself 'Maharashtra Vikas Aghadi', were staying at different hotels in the city.

The Shiv Sena said it had submitted the signatures of 63 MLAs (including independents), while the Congress and the NCP claimed to have submitted signatures of 44 and 51 MLAs respectively.

The Aghadi's show of strength came two days after the BJP, in a surprise move, formed government in the state with the help of rebel NCP leader Ajit Pawar. BJP's Devendra Fadnavis took oath as the chief minister while Ajit was sworn in as the deputy chief minister in the early morning on Saturday.

NCP chief Sharad Pawar, however, on Monday said he was not behind Ajit Pawar's decision to align with the BJP and asserted that his party along with Congress and Shiv Sena will form the next government in Maharashtra.

The BJP is the single largest party with 105 MLAs in the 288-member state assembly followed by the Shiv Sena (56), NCP (54) and Congress (44). The Sena broke its three-decade-long ties with the BJP after the latter declined to share the chief minister's post.

The Supreme Court will pass an order on Tuesday on the issue of a floor test in the Maharashtra Assembly to ascertain whether Chief Minister Devendra Fadnavis enjoyed majority, as the BJP and the Shiv Sena-NCP-Congress combine sparred over their claims of support.

The order will be passed at 10.30 am, the court said on Monday, giving the shaky 3-day-old Maharashtra government a breather in the intense battle for numbers between the rival camps.