Police are seeking to decrypt Fathima's phone to access her notes 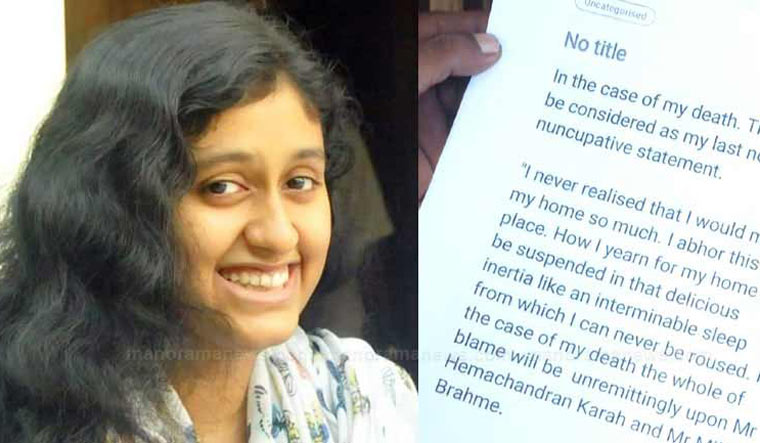 (Right) The suicide note of Fathima Latheef (left), distributed among mediapersons | via Onmanorama

Days after Fathima Latheef, a 19-year-old student of IIT Madras, was found hanging in her hostel room in an apparent suicide, the probe by the Chennai Police has picked up steam, taking into account the text messages on her cell phone. Twenty-five people, including professors and students of IIT Madras, are on the inquiry radar of the police. Fathima was a native of Kollam in Kerala.

Thursday was a day of high-decibel protests outside the prestigious IIT campus near Guindy in Chennai, as City Police Commissioner A.K. Viswanathan reached the campus. Students from the SFI protested outside the gates of IIT Madras, demanding justice for Fathima Latheef and raised slogans to put an end to the spate of suicides in the IIT campus.

The SFI also raised slogans, calling for the arrest of the professors named by Fathima and demanded action by the police. Several other student organisations are also expected to take to the streets. On Wednesday, the students from the Campus Front of India (CFI) protested outside the campus, demanding swift action against the professors who allegedly harassed Fathima.

According to highly placed sources in the police department, pressure has been mounting since Wednesday, after the parents of Fathima spoke about her suicide note—in the form of text on her cell phone—to the media and particularly after Kerala Chief Minister Pinarayi Vijayan wrote to his counterpart Edappadi K. Palaniswami, demanding a fair probe.

Sources in the police said that Fathima's phone is locked with a password. Apparently, the cyber crime police have filed an affidavit in the Saidapet court in Chennai, seeking permission to send Fathima's phone to the cyber-research department to look into the truth in the text notes.

According to an officer at the Kotturpuram Police Station, teachers and students of the Department of Humanities at IIT Madras are being questioned regarding all the allegations that have been raised so far. Sources also add that Professor Sudarsan Padmanabhan, who has allegedly been named in the suicide note, has been brought under the inquiry radar. Sources say Sudarsan, who was not in Chennai, was asked to come back specifically for the inquiry.

Police sources also say that the investigation is under way, and at least 11 witnesses have been questioned till now. An FIR has been filed under Section 174 (unnatural death) of the Criminal Procedure Code. However the Chennai Police, according to sources, are clueless about allegations that caste discrimination was a factor in Fathima's death. Police sources say the inquiry might take a new turn once they get to know the veracity of the notes on Fathima's phone. The police sources say that they hadn’t picked up on anything with regard to caste and religion until now.

Fathima's parents are yet to lodge a formal complaint. The parents, who were expected to be in Chennai on Thursday for the inquiry to go ahead, have still not reached.

Fathima Latheef, a student at the Department of Humanities and Social Sciences at IIT Madras, allegedly hanged herself from the ceiling fan in her hostel room in the campus on November 9. Three days after the incident, her father, Latheef, demanded a fair probe into the incident and sought that the professors who allegedly harassed her be brought to book. "Harassment and caste discrimination had forced my daughter Fathima to take the extreme step," said Fathima's mother.

Social media users have called her death an ‘institutional murder’.