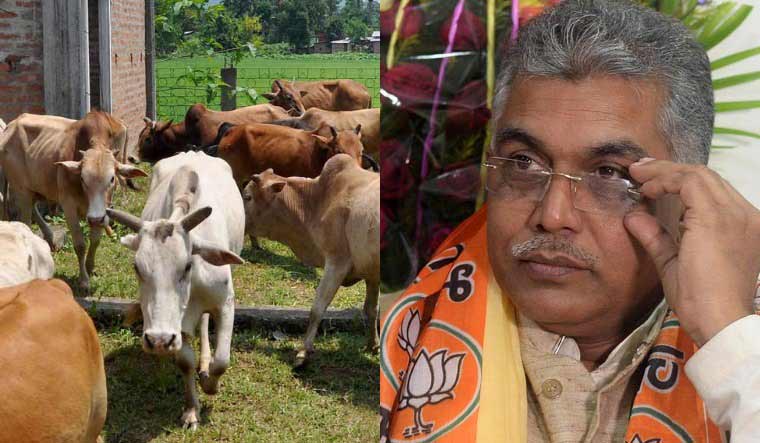 West Bengal BJP unit chief Dilip Ghosh is no stranger to utterances that stoke controversy and grab eyeballs. From threatening to chop off the heads and legs of TMC workers during the Lok Sabha poll campaign to warning of a 'Balakot-like' strike on Jadavpur University, Ghosh has seemingly said it all.

On Monday, speaking in Burdwan district, Ghosh harped on a topic close to many in the Sangh Parivar: Cow protection. Ghosh was speaking at a programme organised by the Ghosh and Gavi (cow) Kalyan Samiti in Burdwan.

According to The Telegraph, Ghosh offered prayers to a cow and a calf. He then extolled the virtues of 'desi' (indigenous) cows. Ghosh was quoted by The Telegraph as saying, "There is gold mixed in its [desi cows'] milk and that is why the colour of their milk is slightly yellow." Ghosh even claim the desi cows had a blood vessel that helped "produce gold" with the help of sunlight.

He claimed the cows that were imported from abroad were "not cows... but a kind of beast". Ghosh even claimed foreign breeds don't sound like cows. "So those are not our gau mata, but our aunties. It is not good for the country if we worship such aunties," Ghosh was quoted as saying.

The West Bengal BJP chief even claimed Indian gods did not accept "foreign commodities", so it was not right to worship the deities with milk of foreign breeds. He then targeted Indian political leaders who had married foreign women, saying "not only foreign cows, a lot many are bringing foreign wives". Ghosh described such wives as a malicious influence.

In addition to delineating between Gau Mata and Cow Aunty, Ghosh challenged intellectuals who eat beef to eat meat of other animals. "Few intellectuals eat beef on roads; I tell them to eat dog meat too, their health will be fine...," Ghosh was quoted as saying by ANI.

Ghosh declared "Cow is our mother; we stay alive by consuming cow milk. So if anyone misbehaves with my mother, I will treat them the way they should be treated. On the holy soil of India, killing cows and consuming beef is a crime."