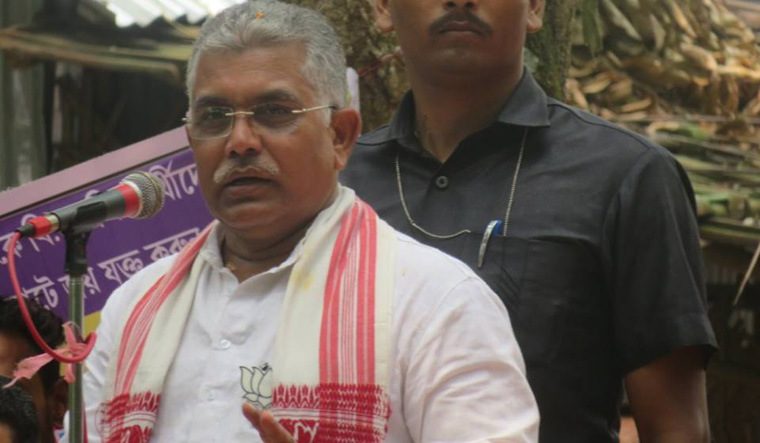 In a statement that is bound to further escalate tension between the BJP and Mamata Banerjee's administration, the West Bengal BJP president has threatened to chop off the heads and legs of Trinamool Congress workers if they resorted to violence.

Ghosh made the statement at a rally in Madhyamgram in North 24 Parganas district on Sunday. Ghosh said, “I am asking the Trinamool Congress goons to behave like gentlemen. If they attack us and kill our men, we know how to retaliate. We will then ask them to decide how they would like to be killed—chopping off their legs or heads?”

“This is Dilip Ghosh, not anyone else. I do what I promise,” he declared.

When asked about this statement by THE WEEK, Ghosh said, “This is nothing new. Trinamool Congress understands this kind of language. We are not like other parties, like Congress or CPI(M), who would go inside their houses when facing attacks. We know how to deal with them.”

Ghosh said he has asked BJP workers to be alert on the day of filing nominations for panchayat election on Monday, after it was extended by the West Bengal state election commission after the Calcutta High Court ordered it to do so.

While nominations are being filed on Monday, reports of incidents of violence are still coming in from different parts of the state—north to south. A BJP office in Bankura was ransacked and workers were beaten up. BJP leaders hit the streets and blocked the road, protesting the incident.

Ghosh said a BJP activist, Sheikh Dildar, was gunned down during a clash between activists of Trinamool Congress and BJP in Suri, Birbhum district. BJP condemned the attack and said TMC would be “paid back.” However, the TMC claimed Dildar was a Trinamool supporter.

The offices of block development officers and subdivisional officers have been enveloped in heavy security cover.

“He is a goat. Come 2019, people like Dilip Ghosh will vanish from Bengal politics,” he said.

This is the second time in three days that Ghosh has openly spoken in a strident tone, advocating violence against the Trinamool Congress. After the Calcutta HC's decision to order new dates for the panchayat polls, Ghosh warned that the BJP could show the TMC the “language of violence.”

Meanwhile, senior Congress leader and Rajya Sabha MP Pradip Bhattacharya on Monday wanted to meet the state election commissioner to register a protest against the violence erupting all over the state.

"But the commissioner refused to meet me. He forgot that I am an MP," said Bhattacharya.

The state government has advised the commission to finish the election before Muharam (which falls in mid-September).

The Congress has also knocked on the door of the Calcutta High Court seeking Central security forces for the election.

Adhir Chowdhury, Congress state president in West Bengal, has appealed to the court that unless proper security is arranged, it would be difficult for people to vote without fear. The High Court will hear the Congress' plea soon.