When BJP banked on the Hindutva card in 1992 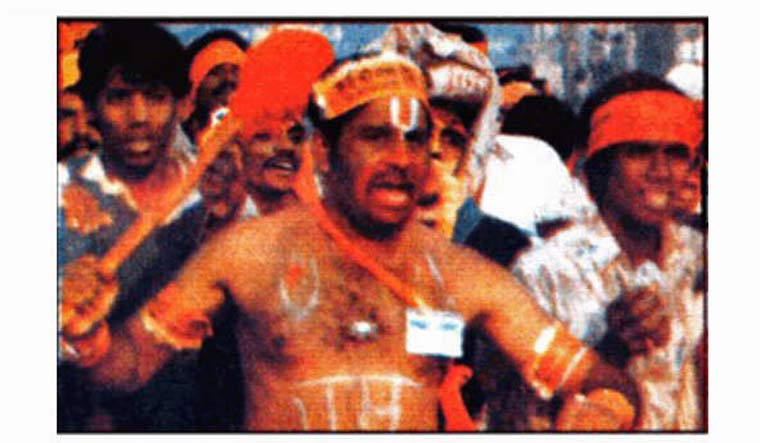 Despite its initial apologetic reaction, the BJP is jubilant. And defiant. Its leaders believe they have achieved what they wanted. Whether the BJP planned it exactly that way or not, Babri Masjid has been demolished and the Ram temple built, though only symbolically.

Says Ramesh Sharma, a sweetmeat vendor in Indore: "There is no mosque now and the Ramlala idols have been installed. That is very important." The bare-footed VIII standard dropout, who wears a dhoti-kurta and a tilak on his forehead, does not give a damn to the court judgments.

Neither do the thousands of Hindus who streamed into Ayodhya to do kar seva. They were the people who formed the vanguard of BJP's ride to power in the four northern states in the Hindutva rath. Since they believe that the BJP-VHP-RSS combine kept its promise of liberating Ram Janmabhoomi, they are back on a roll. And the BJP hopes to cash in on their fervour.

Initially, the BJP appeared to be on the defensive. The few leaders in the party's central office at 10, Ashoka Road were clearly bewildered. However, even as the non-BJP opposition in Parliament went for Prime Minister P.V. Narasimha Rao's jugular, the BJP national executive convened at the central office to strike a defiant posture. It announced that the demolished structure was not a mosque but a temple. Spokesman K.R. Malkani repeated this to the media, particularly the foreign correspondents.

Was the BJP leadership in the know of the plan to demolish Babri Masjid? Journalists and photographers who were  in Ayodhya on December 6 swear that they witnessed a rehearsal. But the BJP denies it. Says vice-president Sunder Singh Bhandari, who was among those deputed to supervise the kar seva: "The work was divided among the kar sevaks. Some were to wash the Ram Chabutara and some were to bring clay from the Saryu. But suddenly things went out of hand and the disputed structure was demolished. There was no question of any rehearsal."

Though the BJP leaders refused to condemn the kar sevaks' action, they did express regret over the incident. Says Malkani: "We wanted the disputed structure to be removed and relocated peacefully while respecting the rulings of the court. But the kar sevaks demolished it. Of course, the incident was unfortunate."


The party refused to be cowed down by the arrests of president Murli Manohar Joshi and opposition leader L.K. Advani. Says veteran A.B. Vajpayee: "The FIR said that Advani and Joshi delivered inflammatory speeches, but there was no mention about the contents of the speeches." Adds Bhandari: "In fact, Advani and Joshi could not speak at all. The moment they reached the dais, the kar sevaks began climbing the barricades. All that they did was to call back the kar sevaks."

Significantly, the party believes that the arrests of its leaders would do it a world of good. Joshi, whose performance as the president of the largest opposition party was lackluster to say the least, and Advani had overnight become 'martyrs' in the cause of Hindutva. The Centre's announcement that it would rebuild the mosque was to the BJP's advantage, its leaders believe. For, the well-meant move to appease the Muslims would further alienate the Hindus from the Congress, according to them.


That in the BJP's electoral calculations means more votes. No wonder it sought to whip up Hindu emotions further. Says Bhandari: "The demolition was an accident. But now that it has been done we shall not allow the mosque to be rebuilt." Asks Malkani: "Where was the government when several temples were demolished by militants in Kashmir?" Bhandari, who is supposedly the party's president-in-waiting, avers that the BJP has gained tremendously because the Congress's 'anti-Hindu' stance has been exposed. Besides, he says, the Congress is only helping his party by joining hands with the National Front, Left Front and the Muslim League. "There is a polarisation in the society in our favour. No other situation can be better than this," says he.

The BJP does not accept blame for the countrywide riots that erupted on December 7. Says Bhandari: "It is the non-BJP opposition and fanatic Muslim leaders who are to be blamed." Even the ban on its sister organisations failed to dampen the upbeat mood in the BJP. The party insists that the onus is on the Centre to prove the complicity of the RSS and the VHP in the countrywide riots. "We intend to fight it out," says Vajpayee. Says Bhandari: "We are not like the Islamic Seva Sangh which developed cold-feet and announced the disbanding of the organisation." Said another leader from MP: "This will be the last ban on the RSS." Their cockiness stems from the leadership's belief that the party would sweep the polls if it were to be held now.

Apparently, the leadership senses a Hindu backlash, especially in the wake of reports of destruction of a number of temples inside and outside India. This scenario fits in very well with the party's strategy chalked out at a meeting at the chief minister's bungalow in Lucknow on December 7 attended, among others by Joshi, Advani and Kalyan Singh. It was decided that the party should confidently project its record of redeeming its most important electoral pledge—the demolition of the mosque. As the leaders believe that a midterm poll is a distinct possibility, MPs have fanned out to their constituencies to do some stock-taking of the Hindu vote-bank. Even the threat of dismissal looming large over its three other state governments does not dampen the leadership's enthusiasm. To them, it is a worthwhile sacrifice. The eyes are set on elections and the potential of the Hindutva card.