Didn't learn poverty from books; lived it: Modi recalls his past in Saudi

'Not from any big political family; reached here by selling tea on railway platform' 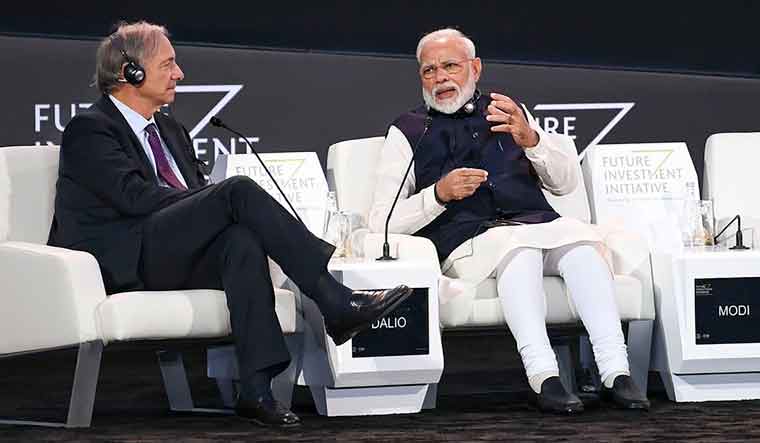 Prime Minister Narendra Modi in Saudi Arabia on Tuesday said recalled his poverty days, including selling tea on the railway platform, which formed a crucial part of his life journey. "My background is not that of any big political family. I have not learnt about poverty from the books but I have lived it. I have reached here by selling tea on the railway platform," said Prime Minister Modi during the question-answer session at the Future Investment Initiative (FII).

"In a few years, India will be successful in eradicating poverty. My fight against poverty is by empowering poor. Poor need dignity. When a poor person says that he will himself end his poverty, then there is no greater satisfaction. All we need is to provide him with dignity and empower him," said PM Modi. He said constructing toilets and opening bank accounts have empowered the poor in India and have given them a sense of dignity.

The Prime Minister said that when there is a change in India, then the figures in the whole world change. "It gives me immense satisfaction to see that a change in India brings the change in figures for the world. When we make India open-defecation-free (ODF) or eradicate poverty, then the figures of the world change. It gives the satisfaction that we are contributing to improving the world," said he.

Prime Minister Modi was responding when asked about his government's schemes of building toilets and other popular programmes for citizens of India.

After the delegation-level talks, the two sides signed an agreement to establish the India-Saudi Arabia Strategic Partnership Council to coordinate decisions regarding strategically important issues.

The council will be headed by Prime Minister Modi and Crown Prince Mohammed and meet every two years.

The two sides condemned terrorism in all its forms and manifestations, and agreed to step up bilateral security cooperation.

Saudi Arabia, known to be a key ally of Pakistan, has been siding with India in its campaign to rid the region of terrorism and pledged to extend all cooperation to effectively deal with the challenge.