If confirmed as the next CJI, Justice Bobde would serve till April 23, 2021 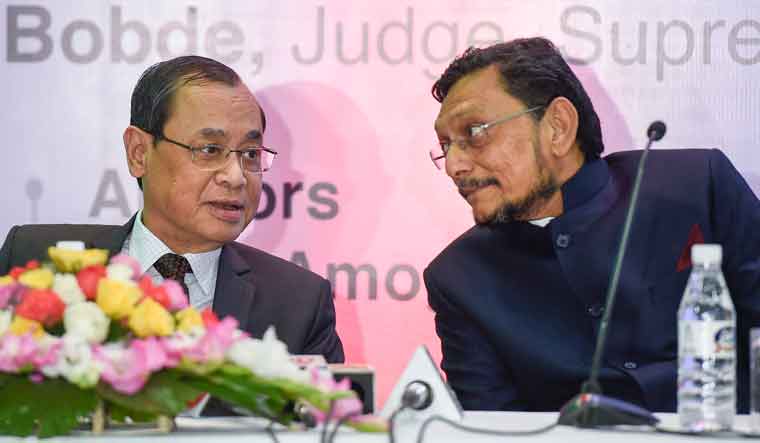 On Friday morning, news emerged that Chief Justice of India Ranjan Gogoi had recommended Justice Sharad Arvind Bobde as his preferred successor in a letter to the Centre. Justice Bobde is the senior-most justice of the Supreme Court after Gogoi.

Justice Bobde comes from a family of eminent jurists. He was born in Nagpur on April 24, 1956. Bobde's grandfather, Arvind Bobde, was a former advocate-general of Maharashtra. His father and brothers were also lawyers, with his brother practising in the Supreme Court.

Justice Bobde obtained BA and LLB degrees and enrolled in the Bar Council of Maharashtra in 1978. He worked as a lawyer, appearing before the Nagpur Bench of the Bombay High Court and the Supreme Court. Justice Bobde was designated a senior advocate in 1998.

Justice Bobde is also the executive chairman of the National Legal Service Authority.

Justice Bobde has been part of Supreme Court benches that have given landmark judgements.

Bobde is part of the five-member Supreme Court bench—headed by Chief Justice of India Gogoi—that is currently deliberating its verdict in the Ayodhya dispute case. The five-member bench is expected to give its verdict before November 17, when Gogoi is due to retire.

In March, a bench headed by Justice Bobde ruled out a complete ban on firecrackers in India and sought regulation of pollution caused by them.

Justice Bobde was part of the nine-member bench that recognised privacy as a fundamental right under Article 21 of the Constitution in August 2017.

In March 2015, a three-member Supreme Court bench—comprising Justices Bobde, Jasti Chelameswar and Chokkalingam Nagappan—ruled that “no person should be denied any benefits or 'suffer' for not having the Aadhaar cards...”

In August 2017, a bench of Justices Bobde and L. Nageswara Rao permitted a pregnant woman to abort her 26-week-old foetus, which did not have a skull. The bench observed, "The condition of the foetus is not compatible with life. The medical evidence clearly suggests that there is no point in allowing the pregnancy to run its full course..."

Justice Bobde also reportedly played a key role in patching up differences between then chief justice of India Dipak Misra and four other senior justices of the Supreme Court over the running of the Supreme Court. The differences led to the four justices calling a press conference in January 2018, opening an unprecedented chapter in the country's judicial history. Justice Bobde reportedly helped press for a new method of allocation of cases across various Supreme Court benches, which was one point of difference between Misra and the other justices.

In April, Justice Bobde was named by Chief Justice of India Gogoi to probe allegations of sexual harassment that had been raised against him. Bobde headed a panel comprising Justices Indira Banerjee and Indu Malhotra, which eventually gave a clean chit to Chief Justice of India Gogoi. However, the constitution of the in-house panel had triggered criticism of the Supreme Court.

According to a document uploaded on the Supreme Court website, Justice Bobde has listed his assets as including two houses and an apartment. His financial assets—consisting of mutual funds, fixed deposits and bank saving accounts among others—have a total value of Rs 59,47,949. The information is dated to September 2013.