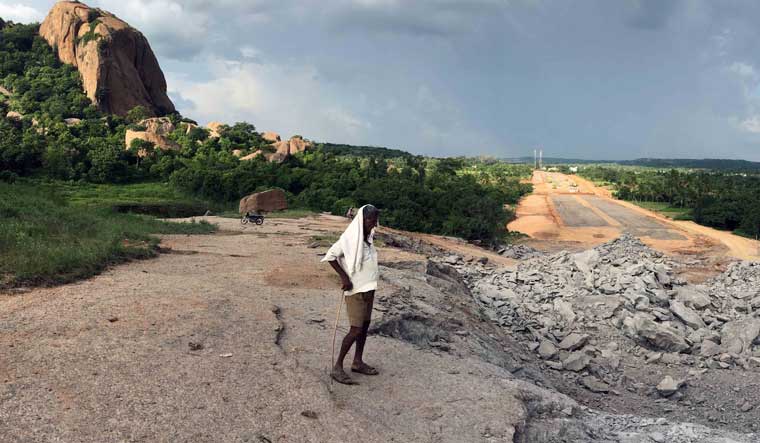 When Sholay was being shot in the rocky regions of Ramanagara, Karnataka, the locals grew used to the sounds of dummy dynamite used to replicate the gunfights and explosions seen in the film.

Now, what locals hear is the real deal, as a national highway project takes its toll on the landscape.

As part of the construction of the Union government’s national highway project connecting Bengaluru to Mysuru, a six-lane road must pass through Ramanagara, bypassing the town. Now, the mammoth boulders around Ramadevarabetta, India’s only sanctuary for the endangered long-billed vultures, are being crushed by real dynamite blasts, as the government races to meet its three-year deadline to build the highway.

These boulders were where the popular Sholay scene was set; the Shiva temple where Basanti prays to Lord Shiva and Veeru impersonates the god’s voice.

These unique magma-origin rocks, called closepet granite, were also the shooting spot for David Lean’s 1994 Hollywood film A Passage to India. The three caves that were drilled to depict the Malabar caves in the film are now under the ledge where the long-billed vultures nest. Local environmentalists complain that a lot of damage to nature was done during the shooting of many films here. The announcement of the Ramadevarabetta Vulture Sanctuary 2012 put a restriction on film shooting in this area.

Eranna, who witnessed the shooting as a boy, now works as a parking attendant at the sanctuary. He says the road will bring a “good price for the landowners” but that it will also disturb the pristine landscape.

The legacy of Sholay 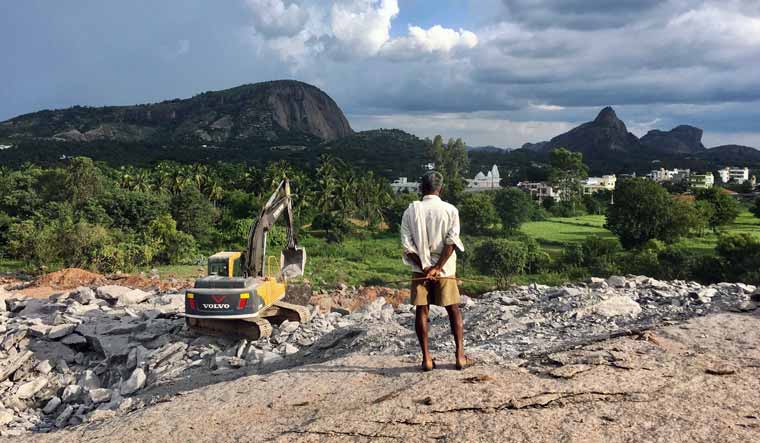 “The greatest star cast ever assembled!”. This how the original poster of Ramesh Sippy’s 1975 Bollywood blockbuster Sholay was presented. The characters of Veeru played by Dharmendra, Jai by Amitabh Bachchan, Basanti by Hema Malini, Thakur by Sanjeev Kumar, Radha by Jaya Bhaduri and the infamous dacoit Gabbar Singh played by Amjad Khan made for that era’s biggest star cast indeed.

But, no less prominent than the characters were the huge boulders of the backdrop, serving as the landscape of the fictional village of Ramgarh, which is in current day Ramanagara town, 50 kilometres away from Bengaluru.

Sholay was shot around Ramadevarabetta for more than two years. The landscape created by its mammoth granite outcrop was wisely chosen to depict the remoteness and enigma in the film. Sholay’s producer set up a temporary township for workers, which was called Sippy Nagar. With production taking place during a time of drought, the film ended up giving jobs to many locals. Some crew members even married locals.

The film’s legacy was such that it was termed as an Indian version of wild west films, creating a new genre known as the curry western.

The proposal for a Sholay-themed park by Karnataka government at the Ramadevarabetta was opposed by environmentalists, who said that it would disturb the eco-sensitive zone, particularly the habitats of vultures. But, when the access-controlled road is made ready, you can catch a glimpse of the entire rock face of Ramadevarabetta and the Sholay shooing locations, while passing through the area from the comfort of a car seat, just by paying a toll.