Opponents of SC ruling are protecting beliefs that are decades, if not centuries, old 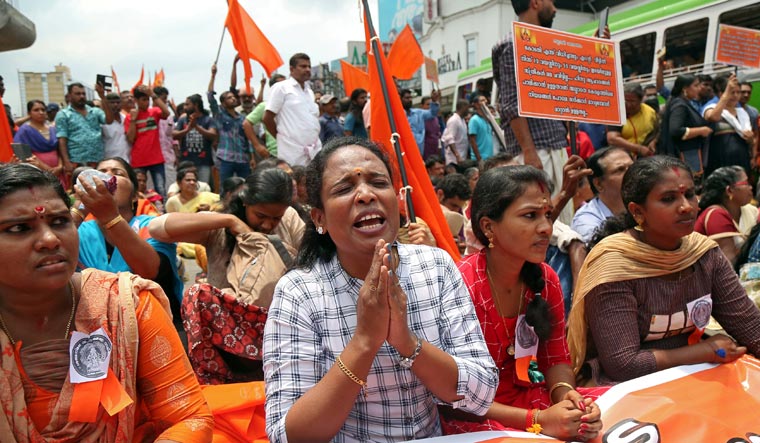 I am a proud feminist, one who tends to wear it on my sleeve. At family gatherings and during discussions with friends or colleagues, I am known to defend my feminist point of view with aplomb. I am also a proud Malayali. Chauvinism is prominent in the state of Kerala, but women are mostly given an equal footing.

While the way is paved for women with ambition, they are also at the receiving end of stares for wearing something as regular as jeans and top. While women in Kerala are lauded for joining the ranks of IPS and IAS officers, they are also asked visheshamundo? (Are you pregnant yet?).

It is one year since the Sabarimala verdict by the Supreme Court was announced―the verdict that caused much chaos in the state like it hadn't seen in years. I was initially shocked to see people around me rip the Supreme Court ruling into pieces. “How dare they!”, “Don't they know our culture?”, “How can you disrespect Lord Ayyappa?” were some of the most common comments I heard from both men and women. Then there was the other side—“This is a move in the right direction!”, “Menstruation is nothing to be ashamed of” and “More to women power,” said some men and women.

I am a Hindu, but a non-practising one. Far from sitting for homams and other rituals, I am not one to visit temples unless my mother or mother-in-law tell me it is an important day in the Hindu calendar and it would be nice if I would go. But I understand where sentiments that were against the Sabarimala verdict came from. I grew up on a healthy dose of mythological stories.

I know all about how Ayyappa, the son of Vishnu and Mohini, who was adopted by the childless royal couple of Pandalam, and grew up to be Swami Ayyappa, the god most Keralites came to become devotees of. I have heard the story of his vow of celibacy to serve his devotees and how he said that he would get married to Malikapurathamma (the woman who fell in love with him) only when first-time devotees stopped visiting his shrine.

It is to maintain Ayyappa's vow of celibacy that women of menstruating age are barred from entering the Sabarimala temple. Apart from that, I have seen my cousins and uncles grow a beard, eat vegetarian food for 41 days, fill irumudi kettu (a cloth pouch filled with rice, coconut and other puja items) and set off on the journey to pay respects to their deity.

Now, those who are against the verdict that allows women of all ages to visit the temple are not really against feminism or equal rights for women. All that they are doing is protecting beliefs and traditions that are decades, if not centuries old. True, for non-believers and atheists, the story might be equivalent to a fairytale or a folk-tale passed on from one generation to the next. After all, storytelling itself is an age-old tradition.

Kerala, besides giving equal footing to women, is also a state known for communal harmony. Travellers from many countries came here―right from the Dutch and the Portuguese who colonised the state to some extent, to the Punjabis and the Gujaratis who came here for trade and job opportunities. People belonging to all religions co-exist peacefully in Kerala, and one of the main reasons for religions coexisting in this manner is how traditions of other religions are respected. Christian and Muslim business owners shut shop on Christmas and Eid, respectively, while they stay open on Diwali or Vijayadasami. Festivals are celebrated, but the festivities are barely known. Lights go up duly on Diwali and Christmas, but you will not find the kind of brouhaha as you would in a Delhi or a Mumbai neighbourhood during the same festivals.

There is a ‘live and let live’ kind of vibe in Kerala. While this kind of existence might seem bland to the eye of an outsider, this is exactly what makes Kerala a unique state, where religious sentiments aren't easily roused nor is discord created by politicians campaigning for vote-banks. The reason for this is deep respect and understanding for one another's traditions.

It is for keeping these very traditions sacrosanct that scores of Hindu women and men rose up in arms to protest against the Sabarimala verdict. Traditions that have been held close for so many years cannot be discarded by one judicial ruling. They simply cannot be kept aside in the name of ‘female empowerment’. For our secular society to thrive, it is of utmost importance that all religions thrive side by side. While one might argue “what about women's empowerment”, we have seen that obsolete practices like Sati and child marriage are no longer in practice and that is what counts.

Not allowing menstruating women into the shrine in no way is anti-feminist. The verdict, at the same time, does not break any boundaries. Many other obsolete traditions need to be questioned like isolation of women during menstruation or female foeticide that is still practised.

So, I come back to my point―those against the Sabarimala verdict are not necessarily anti-feminist. They are merely guardians of a time-honoured tradition that has nothing to do with discrimination against women.