In 2016, a govt-funded survey of the scheme had exposed it, long before Mirzapur 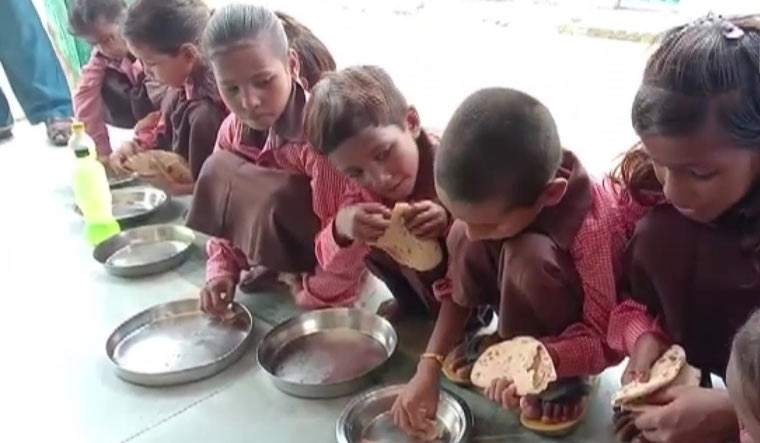 Before the salt and roti served as mid-day meal (MDM) to students in a school in Mirzapur in Uttar Pradesh created an uproar, a government-sponsored study had laid bare the severe shortcomings of the scheme.

In 2016, a social audit exercise of the MDM was conducted by the Lucknow-based Giri Institute of Development Studies (GIDS) in two districts—Barabanki and Shrawasti. In both districts, 20 schools were covered from two different blocks. In each selected block, 10 schools (6 primary and 4 upper primary) belonging to different gram panchayats were selected randomly.

The study was titled ‘Pilot Social Audit of Mid-Day-Meal Scheme in Barabanki and Shrawasti districts of Uttar Pradesh' and was sponsored by the Mid-Day-Meal Authority of the state.

Some of the findings of the audit were: Not all school had kitchen sheds due to lack of space and funds; there was wide variety between availability of cooks and helpers at different schools (ranging from 28 per cent to 71 per cent); no health check-ups of cooks and helpers is done and no days were earmarked for celebrating a scheme which had been envisaged as having far-reaching positive impact on school enrolment, school retention and nutritional status of children. Moreover, regular payments of cooks and helpers were happening in only nine of the 40 schools.

Regarding the availability of food supplies (which was a point of contention in the Mirzapur incident), of the 40 schools in the study, only 26 had supplies worth a month. On the quality parameter, three in 10 schools described the food as of ‘average’ quality. The quantity of the meal was also reported to be insufficient at many places as the same kitchen was providing food to younger children enrolled in the ICDS centre attached to the school. While in 80 per cent of the schools, food supplies came through the PDS, in the remainder, it fell upon the Gram Pradhan or school teacher to arrange for the same. Gram Pradhans were, however, found not to maintain records of the supplies. So, income and expenditure could not be ascertained.

Necessary facilities such as potable drinking water were available only in four of the five schools surveyed, while only four in five schools had pucca kitchen sheds. Storerooms fared even poorly with only 67.5 per cent of the surveyed schools reporting them. The other great drawback was the lack of plates at schools because of which children had to get utensils from home—and these were often too small to give the food as mandated. The availability of drinking water through hand-pumps, and thus unhygienic, was another matter of concern noted by the report. Stealing of food grains and gas cylinders were also causes of concern.

While it is apparent that many of the concerns raised by the above report were not paid attention to by the state government, it has now decided to conduct yet another evaluation of the MDM through the Govind Ballabh Pant Social Science Institute, Lucknow University and the Indian Institute of Management, Lucknow.