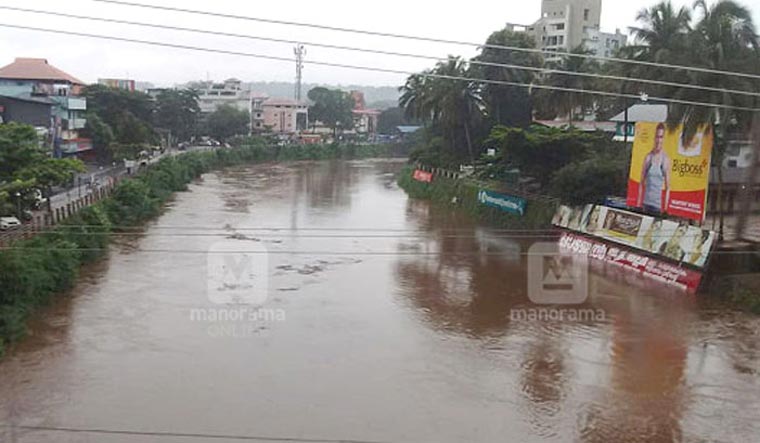 The Meenachil river in Pala | onmanorama

With the heavy rain continuing in Kerala, the district administrations in Idukki, Kozhikode, Wayanad and Kasaragod have alerted people to exercise caution and the IMD has forecast more rain till July 23.

Fishermen have been advised not venture into the sea due to strong winds. Strong winds from northwesterly direction with speed reaching 40-50kmph are likely along and off Kerala coast. The Aruvikara dam shutters have been lifted due to heavy rains.

People on either side of the Karamana river have been asked to be vigilant with the possibility of flood waters entering homes. The Pamba river is in spate, inundating shops and other establishments in the low-lying areas.

The possibility of landslides and mudslides exist in hilly terrain. If the downpour continues, Kerala will receive rainfall of at least 40cm. The 46 per cent shortage in rainfall experienced by the state will be rectified to an extent if the trend continues.

Kasaragod District Collector D. Sajith Babu has announced holiday for all educational institutions, including professional colleges, in the district on Saturday.

Shutters of the Pambla dam in Idukki district have been lifted to discharge 15 cumecs of water. The Meenachil and Manimala rivers have started overflowing at several areas.

Traffic along the Vagamon-Teekoy route was restored on Friday after it was briefly disrupted due to a mudslide in the area. Mudslides have also been reported from various parts of Idukki.

The red alert is a call to immediately take preventive steps to evacuate people from vulnerable areas to shelter camps and provide others with emergency kits.

The districts are likely to receive extremely heavy rainfall upwards of 20cm, an IMD official said.

Some places in Malappuram, Thrissur, Ernakulam and Kottayam districts received rainfall of over 12cm, the IMD said.

Pilgrims visiting the famous Lord Ayyappa temple in Sabarimala in Pathanamthitta district, which has been opened for the five-day monthly puja, have been facing difficulties due to incessant rain.

Idukki District Collector H. Dineshan told PTI all precautions to deal with any situation have been taken.

With the southwest monsoon intensifying, the IMD has issued orange and yellow alerts across various districts in the state.

The State Disaster Management Authority has asked all the departments to open control rooms at Taluk headquarters. Meanwhile, four fishermen who went to sea from Vizhinjam in Thiruvananthapuram district have not yet returned. "There is no information about them so far," police said.

"The rough sea is making it difficult to conduct search operations. However, our boats have already started the search operations. "We have contacted the Navy. It seems one of the Navy ships are somewhere nearby. They might also help. The Dornier aircraft is yet to arrive. It's late probably due to bad weather," the coastal police said.

Fishermen living on the coast of Kerala and Lakshadweep area have been cautioned not to venture out to sea due to strong winds from the northwesterly direction reaching speeds of 40-50kmph.

The southwest monsoon had set in on June 8, a week late, marking the official commencement of the four-month rainfall season. There has been 46 per cent rainfall deficit till July 15, official sources said. Kerala had the worst deluge in years in 2018. With homes destroyed and thousands displaced, the state is still reeling under the shock of the disaster.

This story was originally published on onmanorama