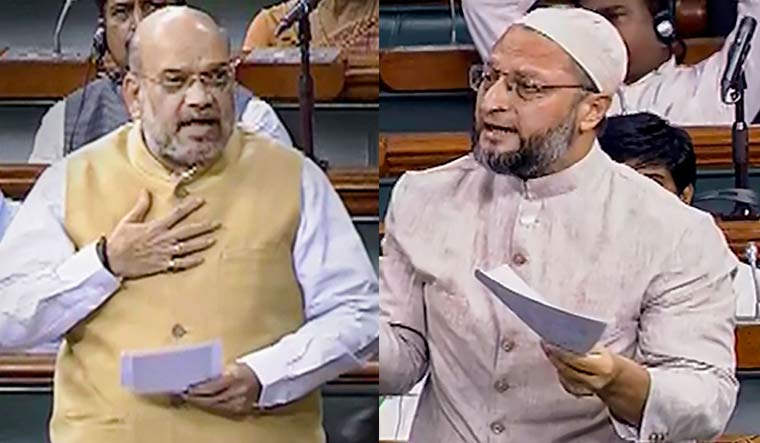 Seeking to give more teeth to the NIA, the lower house passed the bill which allows it to probe terrorist acts against Indians and Indian interests abroad. The amendments will also allow the NIA to probe cybercrimes and cases of human trafficking.

"What powers are you giving to an NIA officer when you send him abroad to investigate someone? Don't compare us to the US and Israel and intrude on other people's sovereignty. Also, you cannot have such a vague definition of national interests in a bill," Owaisi said during the discussion on the bill.

Later, a war of words between Owaisi and Shah began when the former questioned BJP MP Satyapal Singh's allegations that the then Hyderabad police commissioner was prevented from arresting the accused in Mecca Masjid blast case.

“In Hyderabad, I remember a specific case. A police commissioner probing the Mecca Masjid blast case arrested some of the suspects from the minority community. The chief minister himself called the police commissioner and told him not to do this or else he would lose his job,” Singh said.

This created an uproar in the house, with Owaisi, an MP from Hyderabad, demanding that Singh produce proof to buttress his claims.

This prompted Shah to intervene, and the home minister asked Owaisi to listen to the BJP MP patiently. “We listened patiently when they all were speaking. Learn to listen Owaisi sahab. It can't go on like this. You have to listen," Shah said, wagging his finger at the AIMIM leader.

An infuriated Owaisi asked Shah not to point finger at him. “You cannot scare us,” he said.

Later Shah said the Parliament should speak in one voice in giving powers to the NIA to send out a message to terrorists and the world.

He dismissed concerns from a section of MPs that the anti-terror law was misused at times to target members of a particular community. "Let me make it clear the Modi government has no such intention. Its only goal is to finish off terrorism but we will also not look at the religion of the accused while taking action," Shah said.

The NIA was set up in 2009 in the wake of the Mumbai terror attack that had claimed 166 lives. Since 2017, the Union Home Ministry has been pushing for giving more power to the NIA to meet fresh challenges.