Floods, landslides in northeast: More than a million displaced 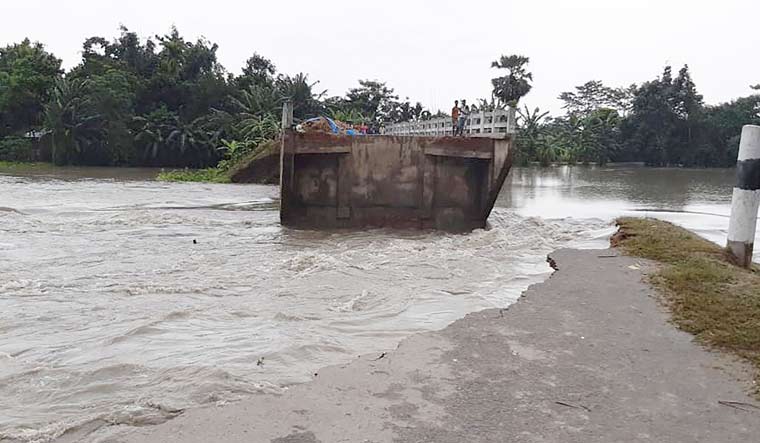 A damaged bridge washed out by the floods at Lahorighat, in Morigaon, Assam | PTI

Floods and landslides, triggered by monsoon rains, have cut a swathe of destruction across the northeast, leaving at least a dozen people dead and displacing more than a million people from their submerged homes.

In fact, in states like Arunachal Pradesh, Sikkim and Meghalaya, besides parts of Assam, landslides have wreaked havoc, snapping road communication in a major way. Large parts of Arunachal Pradesh have been cut off because of heavy mudslides tearing apart roads, including highways.

“I appeal to people across our state to stay alert and those residing in low-lying areas may shift to safer places,” said Arunachal Pradesh Chief Minister Pema Khandu. The Arunachal Pradesh government has directed the disaster response forces, besides the police and the paramilitary, to fully engage in rescue operations. Earlier, this week, two minors, both boarders at a residential school in Tawang, died when a wall collapsed and buried them as they were sleeping in their dorm.

The annual disaster has ravaged Assam where the Brahmaputra is in spate. The Brahmaputra is Assam's main river that flows 700 miles across the state before emptying into the Bay of Bengal. An estimated 10 lakh people in more than 21 of Assam’s 33 districts have been affected. The world-famous Kaziranga National Park, the 480sq.km home of the endangered one-horned rhinoceros (Rhinoceros unicornis), has been flooded.

“The swirling grey waters of the Brahmaputra have entered the National Park that is home to around 2,500 rhinos, the largest concentration of this species in the world. We are concerned,” said Jukti Borak, a forest officer deployed on the highway along Kaziranga. The authorities have clamped Section 144 of the Criminal Procedure Code on the highway that runs alongside the Kaziranga National Park to prevent speeding vehicles from hitting wild animals crossing the road in search of higher ground.

Hydrologists and conservationists have expressed grave concern over the alarming flood situation across the northeast. Professor Nayan Sharma from IIT Roorkee, a well-known hydrologist, said, “The extent of deforestation that is happening in the northeastern states is leading to flooding and landslides. In the end, this is a clear case of climate change impacting our ecosystem.”

With inadequate resources to deal with the grave situation, the authorities in parts of Assam, including Baksa district, have called in the Army to assist in rescue operations. Assam is running nearly 90 relief camps.

With floods leaving a trail of death and destruction every monsoon, demands for recognising the flood and erosion problem in Assam as a national problem are growing. “The government has to bring this issue to the top of its agenda. Every year, the poor in the state suffer from the devastating impact of floods and erosion. This has to be approached in a scientific manner,” said Lurin Jyoti Gogoi, general secretary of the influential All Assam Students’ Union (AASU).