Lesson for SFI from Kerala students' protest: Reap what you sow 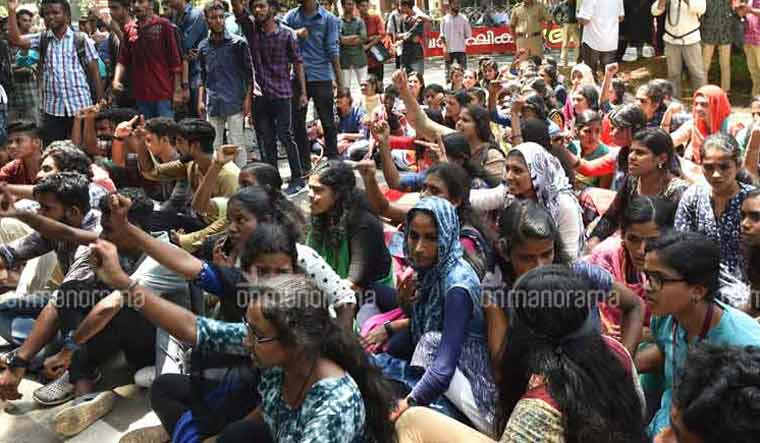 Thiruvananthapuram, the capital city of Kerala, went through some Shakespearean moments on Friday when hundreds of students of a college took to the streets, venting their anger against the Students Federation of India (SFI), the all-powerful student wing of the CPM.

The students of the University College marched on the streets, seeking disbanding of the SFI unit on the campus after a few of its leaders allegedly stabbed a fellow student. Call it irony, the agitating students were shouting slogans that are usually heard in SFI's protest marches. No wonder, because if you are a student of the University College, you have no option but to parrot SFI's slogans.

Hence, it was a piece of poetic justice when a large section of students came out challenging SFI in its own terms. Students of University College were hitherto only made to march behind the SFI leadership, hailing 'freedom, democracy and socialism', the ideals SFI claims to believe in. However, on Friday, the agitating students made slight changes to the slogans.

They asked, “Where is freedom, where is democracy and where is socialism”.

Of course, socialism could be far away. Neither SFI comrades nor their political masters in the CPM will have any clue about where it is. However, they are answerable when a campus asks for freedom and democracy. SFI has been reigning over the campus for years in a Stalinist manner, suppressing voices of dissent physically and mentally.

Tales of SFI's despotic rule, that were hitherto discussed by former and present students in a discreet manner, were shared loudly by the agitators in front of TV cameras. “There's no freedom nor democracy here. It has been SFI's fascism all the way,” students were heard saying to TV reporters.

Several students said they have lost interest in SFI and Communist party after joining the campus while a few said they had problem with only the leadership of the student body on the campus. “They are a group of goons. There are all sorts of lethal weapons stored on the campus,” several of them were heard saying.

One student went on to say that the 'unit room' on the campus was similar to a custodial facility where SFI leaders 'tamed' dissenters. SFI leaders even conduct 'rounds' on the campus doing their bit of moral policing, the agitators said. “Boys were assaulted and girls verbally abused if they don't follow SFI's diktats on the campus,” some of the girls alleged.

This is not the first time allegations of moral policing being raised against SFI leadership of University College. In 2017, two girls had come out against the SFI leadership for cooking up stories about them to defame them for not following their line. Students who have passed out from the college have often said about being forced to participate in SFI's marches and programmes. A girl who refused to do so had to quit the college after attempting suicide recently.

An All India Students' Federation (AISF) leader who tried to file nominations for union election was badly manhandled, according to some agitating students. The AISF, despite being the student wing of the CPI, the second biggest ally of the CPM-led LDF government in Kerala, is not allowed to function in the college by the SFI. Nothing to mention about other students' organisations. All these went unchecked as there was no strong opposition.

Whenever some tried to raise an issue, they were silenced. Media reports about the allegations against SFI were often painted as attempts to weaken the Left forces in the state. On Friday too, the SFI leaders' first attempt was to stop media from covering the unrest on the campus. But then it went out of their hands and spilled onto the streets. Had the students not come out in protest, the latest incident of violence on the campus would also have been buried. So, there was poetic justice in the students' anger because, ultimately, those questions had to be raised from within the campus. Good that it happened at least now, though unfortunately at the cost of a student's blood. The dissenting students have broken the glass ceilings of SFI's fools' paradise within the Victorian building. Now, the consequences of speaking out your mind are yet to be seen.

(This story originally appeared in Onmanorama)