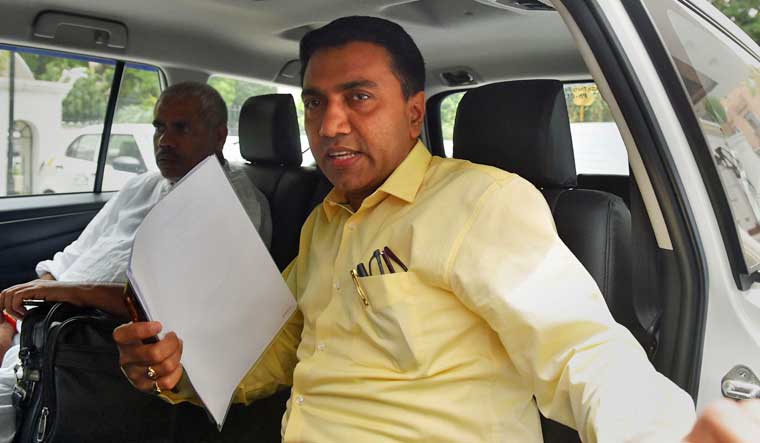 Goa Chief Minister Pramod Sawant said on Friday that he has asked three MLAs of the Goa Forward Party (GFP) and independent lawmaker Rohan Khaunte to resign from his ministry as he would be inducting four new ministers on Saturday.

The GFP said it would take a decision only after speaking to the central leadership of the BJP.

Sawant along with ten MLAs who switched from the Congress to the BJP has met BJP chief Amit Shah and working president J.P. Nadda in Delhi.

"I have asked three GFP ministers and Khaunte to resign from the cabinet. I have given them the instructions as per the orders from my high command," Sawant told PTI over phone from the national capital.

"I will be inducting four new ministers tomorrow," the chief minister added, without revealing their names.

A senior state BJP leader had said earlier in the day that Sawant would induct BJP MLA and Deputy Speaker of Goa Assembly Michael Lobo, and three of the ten MLAs who have switched over from the Congress.

Reacting to the development, GFP chief Vijai Sardesai, who is currently deputy chief minister, said his party had joined the BJP-led National Democratic Alliance after talks with alliance leaders, and the "present state BJP leaders were not part of the discussions then".

"As such we will take appropriate steps only after talking with the NDA leadership at the Centre. We have not yet received any official communication from the BJP central leaders. On the contrary, we have received indications that the matter will be sorted out amicably," he said.

The GFP lent support to the BJP to form government in 2017 under the leadership of Manohar Parrikar, and again in March 2019 when Sawant took over following Parrikar's death.

Lobo told reporters earlier in the day that only one independent might be retained in the cabinet.

Govind Gawde is the other independent in the cabinet at present besides Khaunte, who is the revenue minister.

Justifying the dropping of ministers, Lobo, without naming anybody, alleged that some of them tried to arm-twist Sawant.

"The chief minister is ready to help, but you cannot just be arm-twisting him. You cannot put your ego before him or say 'if you do not do my work I will topple the government'. This language will not do," the BJP leader said.

The swearing-in of new ministers will take place at 4pm on Saturday, Lobo had said.

Ten of the 15 Congress MLAs, led by Leader of Opposition Chandrakant Kavlekar, switched sides and joined the Bharatiya Janata Party (BJP) on Wednesday.

While the ten MLAs and Lobo returned here from Delhi, Sawant stayed back to attend a high-level meeting on Friday evening on the issue of mining in Goa, which has come to a standstill following a February 2018 Supreme Court order.

Apart from Sardesai, the other two GFP ministers are Vinod Palyekar and Jayesh Salgaonkar.