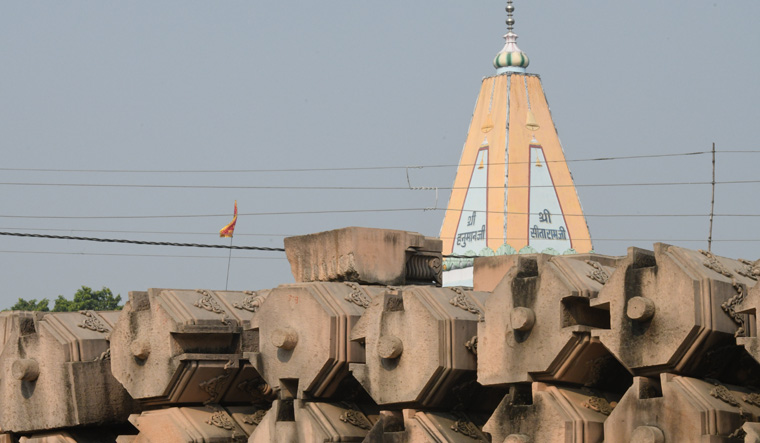 Parts for the proposed Ram temple at Karsevakpuram | Sanjoy Ghosh

The Supreme Court on Thursday sought the latest status report with regard to the ongoing mediation proceedings in the Ram Janmabhoomi-Babri Masjid Ayodhya land dispute case within a week. The SC also said after perusing the latest status report, if it felt that the mediation process ought not to be concluded, the main Ayodhya dispute case would be heard by the apex court on a day-to-day basis from July 25.

The Supreme Court took up the case on Thursday after it agreed to examine the plea of an original litigant in the Ram Janmabhoomi-Babri Masjid land dispute in Ayodhya seeking early hearing of the case as "nothing much" was happening even after a mediation panel was set up to explore an amicable solution of the contentious matter.

Gopal Singh Visharad, one of the plaintiffs in the original civil suit, moved the top court for early hearing of the case. The development assumed significance as a five-judge bench headed by the CJI on May 10 had extended the time till August 15 for the three-member mediation panel, headed by former apex court judge Kalifulla, to complete the mediation proceedings.

The panel, which also comprised spiritual guru and founder of Art of Living foundation Sri Sri Ravishankar and senior advocate and renowned mediator Sriram Panchu, had told the apex court that it was "optimistic" about an amicable solution to the politically sensitive dispute.

READ: Nothing unlawful will happen in Ayodhya

"If the mediators are optimistic about the result and are seeking time till August 15, what is the harm in granting time? This issue has been pending for years and years. Why should we not grant time," the bench had said.

The apex court had on March 8 referred the matter to the panel of mediators for exploring possibility of an amicable settlement.

In its March 8 order, the top court had asked the panel of mediators to hold in-camera proceedings and complete them within eight weeks.

The top court had fixed the seat for mediation process in Faizabad of Uttar Pradesh, around seven km from Ayodhya, and said adequate arrangements including the venue of the mediation, place of stay of the mediators, their security, travel should be forthwith arranged by the state government so that proceedings could commence immediately.

The bench was told earlier by Hindu bodies, except for Nirmohi Akhara, and the Uttar Pradesh government that they oppose the court's suggestion for mediation. The Muslim bodies had supported the proposal.

Fourteen appeals have been filed in the apex court against the 2010 Allahabad High Court judgment, delivered in four civil suits, that the 2.77-acre land in Ayodhya be partitioned equally among the three parties—the Sunni Waqf Board, the Nirmohi Akhara and Ram Lalla.

On December 6, 1992, the Babri Masjid, constructed at the disputed site in the 16th century by Shia Muslim Mir Baqi, was demolished.