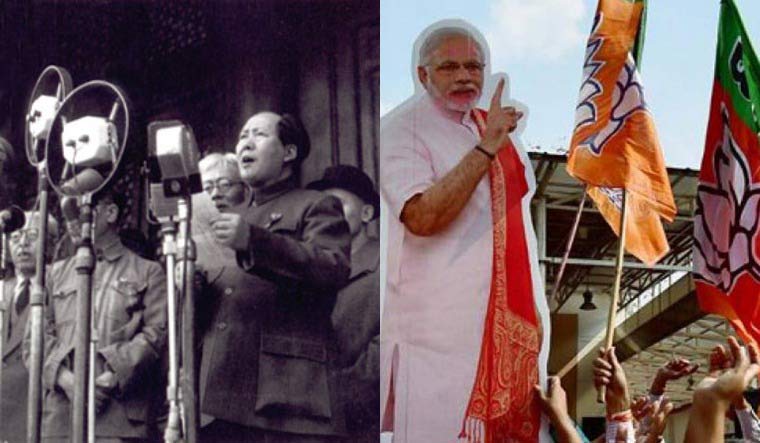 Ever since its resounding victory in the 2014 elections, the Bharatiya Janata Party, under the leadership of Narendra Modi, has been increasingly gaining sway over the political discourse in the country. The strategic expansion policies of the BJP has meant the party has boosted its geographic reach, resulting in a stable, far-reaching presence in the country.

The BJP's expansion has been so massive that it has displaced the century-old Communist Party of China as the largest political party in the world. While the CPC, the lone political party of the most-populated country in the world, has a membership count of 90 million, the BJP claims to have over 110 million members.

Just a month after its colossal win in the 2019 Lok Sabha elections, the BJP has launched a nationwide membership drive—Sangathan Parvadasyata Abhiyan. Aiming to strengthen the party from the roots, BJP vice-president Shivraj Singh Chouhan said the party has set a target of adding a minimum of 20 per cent more workers through the membership drive.

An identical project was carried out, with apparent success, following the 2014 election, after which the BJP claimed an exceptional increase in membership from 20 million in 2014 to 100 million by the end of 2016. Facebook, Twitter and other social media platforms had become sites of registration and anyone could become a member with just a missed call to a mobile phone number.

The resultant surge in the membership count of BJP rendered the Congress a political dwarf, with its relatively meagre strength of 40 million. But at the same time, the staggering growth of the BJP raised several questions about the validity of these numbers. Many people asserted that they were registered as members of BJP without their consent. As calling the number alone could result in membership, many became accidental members by dialling the wrong number! It is also alleged that the same person could register repeatedly from different mobile numbers.

Moreover, political analysts found the registration process for the BJP problematic as the new members could in no way be tested for their loyalty or for their concordance to the party ideology. For instance, a missed call and a Rs 5 registration fee is a small commitment when compared with the membership procedure for the Communist Party of China.

The process to join China's Communist Party takes over a year from application to acceptance and involves letters explaining why the candidate supports the CPC, tests to assess eligibility, recommendations and probation periods. In light of such protocol in the CPC, it would seem that the BJP is the world’s largest political party on the basis of convenience alone. The lax membership procedure of the BJP also results in the contention that not many among the party’s 110 million members are aware of or agree to its principles.

But the absolute majority won by the BJP in the two consecutive Lok Sabha elections stand in validation of the numbers claimed by the party. It may or may not be world’s largest political party, but the BJP is undeniably the most dominant political force in India. And the calculated policies and schemes including the membership drive aim to retain the position of power.

With the newly launched membership drive, the BJP exhibits its technological vantage point. Anyone can register to be a member of the BJP through social media, the party's mobile app or with just a missed call. The added members will be kept aware of any new party scheme or programme for which they can either donate money or their efforts. The BJP claims to be able to follow up on involvement and investment in promising members. Party chief and Home Minister Amit Shah cites his own example, having risen from the post of booth president to that of party president, as proof of the party’s supportive environment, available to members at all tiers.

Calling itself a party of karyakartas (doers), the BJP claims to have trained over 1.5 million party workers in the last four years as part of its leadership training programme, giving the BJP a significant advantage in skilled human resources. Such aggressive tactics employed by the party command has resulted in a vast and growing party base, arguably unheard of in recent history.