Nagesh had been sworn in as minister in June, was minister of small-scale industries 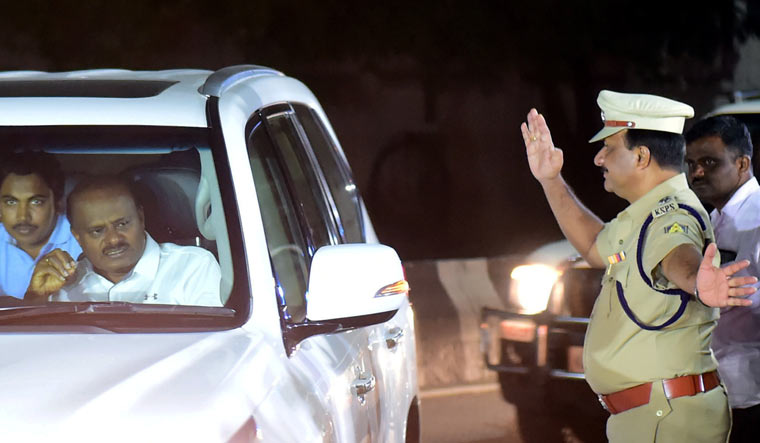 Karnataka Chief Minister H.D. Kumaraswamy arrives at a hotel after his 10 day personal trip to US | PTI

The survival chances of the H.D. Kumaraswamy government got even more bleak on Monday morning after an independent MLA, who was made a minister last month, withdrew support. In a letter to Governor Vajubhai Vala, H. Nagesh said he had withdrawn support to Kumaraswamy's government and was ready to support the BJP if called for.

Nagesh had been sworn in as a minister in June after the Kumaraswamy cabinet made changes following the drubbing of the Congress-JD(S) alliance in the Lok Sabha polls. Nagesh became minister of small-scale industries.

Since July 1, a total of 13 Congress and JD(S) members have submitted their resignations to the Assembly speaker. Till last week, the Congress-JD(S) alliance had a total strength of 119, including the support of two independents, while the BJP had 105 MLAs. If the resignations of the 13 MLAs are accepted, the BJP would have a greater number of MLAs in the truncated Assembly with support from Nagesh and would stand qualified to form the government.

Meanwhile, JD(S) and Congress leaders held meetings from early on Monday in Bengaluru and other places in a bid to save the government. Deputy Chief Minister and senior Congress leader G. Parameshwara declared on Monday that all “current ministers” may resign in order to save the Congress-JD(S) government. Kumaraswamy met Ramalinga Reddy, one of the senior-most Congress MLAs who resigned. Reddy was the home minister in the previous Siddaramaiah government and had reportedly been upset at being left out of the cabinet.

Meanwhile, the Congress has announced it would move an adjournment motion in the Lok Sabha to protest the BJP's alleged bid to “topple” the Karnataka government.