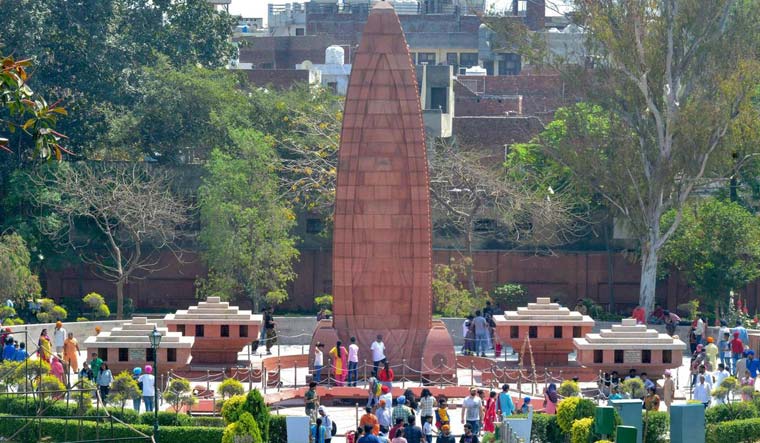 Three months after the April 13 events to mark hundred years of the Jallianwala Bagh massacre, complete with India rising as one to demand an unconditional apology from Britain, and the  renewed efforts to trace the descendants of the victims of the massacre, the work on the makeover of the Bagh has begun, under the over all supervision of the Archaeological Survey of India.

Both the Centre through the Ministry of Culture and the Punjab government have made allocations and plans for the renovation and restoration of the Jallianwala Bagh that counts among the most visited national monuments.

The entire area around the Golden Temple, which is a few steps from the Jallianwala Bagh was “opened up” from what it looked around 40 years ago. About four years ago, enormous renovation and beautification resulted in the last kilometre to the Gurdwara turning into a “heritage street”, and it became a pedestrians-only stretch. It was only the Jallianwala Bagh that was left out. “Now it will also be beautified, and look world class. The Golden Temple has millions of visitors all the time, and most of them also visit the Jallianwala Bagh. The idea is to ensure that they can see the part even after sunset,” said a source in Punjab.

There are many aspects to the renovation, that will be about repair. A light and sound show that visitors could see and hear—with Amitabh Bachchan’s voiceover of the massacre episode—has been out of order for many years ago. A short documentary on the massacre, screened seven times a day in a small hall, had also become a thing of the past. The lighting inside a museum needed to be improved.

But at the heart of the restoration is the most-visited, touched, felt and even “wept” part of the Jallianwala Bagh—the well into which some people fell after a stampede as General Dyer's armed soldiers marched in. Locals believe that some of the victims of that horrible day in history tried to escape the bullets and attempted to take shelter in the well. Punctures in the bricked wall around the well will describe as where bullets pierced in.

The “martyr's well” as it is called, is now covered with a mesh allowing visitors a view. The renovation will see it in its original heritage look, enclosed in a see-through dome of 20-feet diametre. The walk from the entrance to the well is also being redesigned, and the state-of-the-art lighting and digital effects will tell the story to visitors as they walk. Landscaping, gardening,  and a new museum are also part of the plan.

Devout locals who will no longer be able to make their offerings of money and flowers  into the well are naturally concerned. But the district administration says there is no reason to be anxious that the monument will lose anything of historic value. The Centre has cleared a project of Rs 20 crore.