Kollam MP N.K. Premachandran's bill has been included as the first on Friday’s list 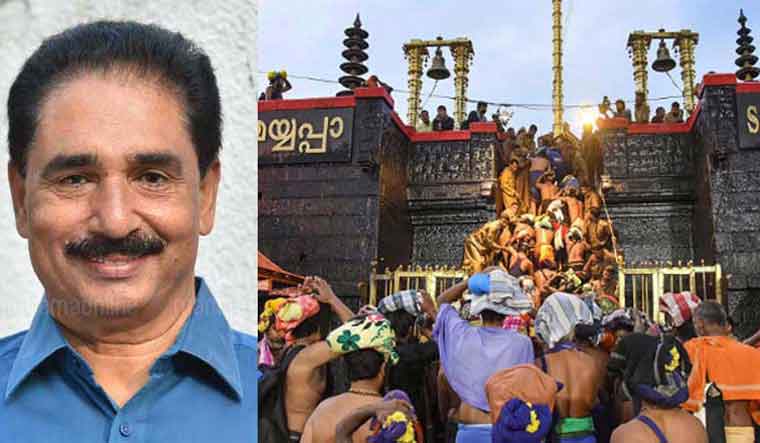 N.K. Premachandran is a member of the Revolutionary Socialist Party (RSP) which is an ally of the Congress | Onmanorama

The Sabarimala controversy is all set to shift its base from Kerala to New Delhi as a bill to protect the customs of the Lord Ayyappa Temple in Kerala's Pathanamthitta district got permission to be presented in the Lok Sabha this week.

The bill would be moved in the Lower House of the Parliament on Friday. N.K. Premachandran, Member of Parliament representing Kollam Lok Sabha constituency in Kerala, would move the Private Member's Bill aimed at resolving the impasse over the Sabarimala shrine after the Supreme Court last year allowed women of all age groups to enter the temple. Premachandran is a member of the Revolutionary Socialist Party (RSP) which is an ally of the Congress.

The bill has been included as the first on Friday’s list. The bill seeks to bypass the landmark judgement made by the five-judge bench of the Supreme Court on September 28, 2018, that lifted the traditional ban on women in the age group of 10-50 from entering the hill shrine.

Though several review petitions were led against the SC order, the apex court is yet to pronounce its judgement on them. The Lok Sabha secretary general had asked if the bill would be deemed valid as the SC order was in effect. The law ministry then checked the bill before it was given permission to be presented in the Lok Sabha.

The religious customs that were being followed at Sri Dharma Sastha temple in Sabarimala as on September 1, 2018, should be continued, even though the court order is in effect.

If the law comes into effect, then the petitions and appeals pending before the court and tribunals should not be valid.

READ: After poll fiasco, Kerala govt likely to give a second thought on Sabarimala

If modications have to be made to Sabarimala customs, it should be based on the religious practices that were followed on September 1, 2018.

The central and state governments have to ensure that religious practices are being carried out.

The government generally does not support the passage of Private Member’s Bill. If the BJP-led NDA government supports the provisions in the Bill, it can be passed in the Lok Sabha. However, it is not known if the central government would be ready for it.

During the last session of the previous Lok Sabha, Premachandran had said that an ordinance should be brought in order to counter the Supreme Court ruling. However, there was no action from the part of the central government. Even in its election manifesto, the BJP did not promise a law to end the Sabarimala impasse.

Instead, the party said it would present the customs and practices of Sabarimala before the SC in a comprehensive manner and it would try to secure Constitutional protection in matters of faith.

—This article was first published on Onmanorama